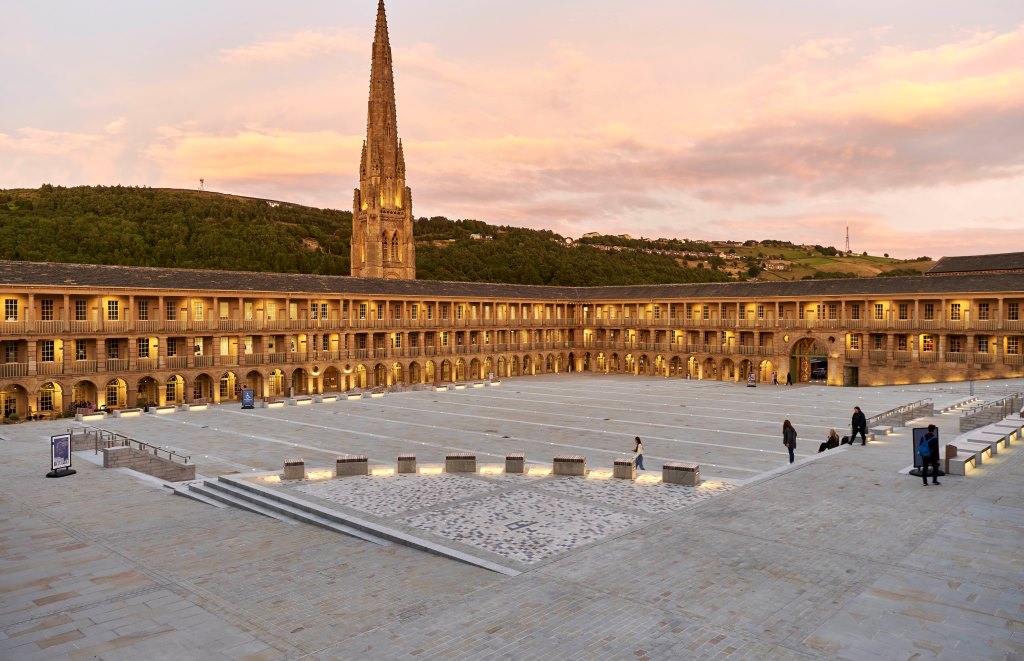 The Piece Hall’s “exemplar” performance has been highlighted in its first annual review, detailing the period of its 2019-20 financial year, during which its income grew by more than a third and close to 80% of its funding came from its own commercial activities. The newly revealed figures showcase the historic venue’s potential for igniting regeneration in the post-Covid era.

Despite the challenges of Covid-19 and Storm Dennis, both of which forced The Piece Hall to shut its doors for extended periods of time, the report shows that its finances are in excellent health, and visitor numbers have significantly beaten targets. The report also highlights the wider positive economic impact that The Piece Hall has had on Calderdale and the Yorkshire region, as well as the important role it is playing as a world-class heritage venue. Key findings revealed today include:

Funded by Calderdale Council and the National Lottery Heritage Fund and with support from the Garfield Weston and Wolfson Foundations, a high-quality transformation project led to the operations of The Piece Hall being transferred to an independent trust who reopened The Piece Hall in 2017.

Since then, The Piece Hall has welcomed over 7 million people through its gates. During the year 2019/20, 2.5m people visited, compared to estimates of around 1.6m made at the time of reopening. This included welcoming thousands of music fans who enjoyed the highly successful ‘Live at The Piece Hall’ events and saw a host of leading artists including Embrace and Elbow perform in the iconic courtyard.

The report paints a positive picture for the future, with The Piece Hall set to play a key role in Calderdale’s emergence from the Covid-19 pandemic. Upcoming world-class events, such as performances from Nile Rodgers & CHIC lined up for 2022, will continue to drive forward the region’s reputation for the arts, culture, tourism and heritage.

“The vision behind The Piece Hall’s transformation was for it ’to become an internationally admired, widely visited and highly successful attraction in its own right … [and] be the key driver in the wider economic regeneration of Halifax and Calderdale‘. Our first Annual Review demonstrates that The Trust are living up to that promise, and that despite the challenges of Covid-19, and thanks to our funders, we now stand ready to play an important role in national recovery efforts.

“The Piece Hall is so much more than just a building. It is woven into the very fabric of our town and is something that so many people are proud of. In a survey conducted by the Halifax Courier’s, Love Your Town, 8 out of 10 local people felt that The Piece Hall is the best thing about the town. Calderdale Council’s 2019 Visitor Economic Survey identified The Piece Hall as being a key factor in the 14% increase in tourism experienced in the borough. All of this is evidence of our ongoing contribution to the local economy and our important role in helping improve people’s lives and livelihoods.”

“The pandemic has caused significant financial challenges for organisations and businesses of all sizes and sectors. However, thanks to funders who have recognised the importance of The Piece Hall, including the Department for Culture, Media and Sport, National Lottery Heritage Fund, Arts Council England, Historic England, The Foyle Foundation and Garfield Weston Foundation, we are in a strong financial position and ready to  support Calderdale’s post-pandemic recovery.

“Prior to the pandemic, I remain proud of the work ands economic uplift that The Piece Hall Trust has achieved in three short years. It really has created a sense of pride at a local and regional level. Our aim remains to take The Piece Hall to nationally and internationally iconic status in the future and continue to create an “extraordinary” economic return to the people of Calderdale.

“According to research from the NP11, the culture, arts and heritage sector contributes around £4bn a year to the North’s economy, employing tens of thousands of people and attracting investment and skilled workers. Of course, in addition to this economic contribution, culture and heritage institutions play an integral role in the health and wellbeing of their communities, providing spaces for people to relax and come together, fostering civic pride and aspiration, sparking creativity and giving people hope for the future.

“However, we are only just starting to emerge out of the current world crisis and with many months spent apart from loved ones, it is perhaps our ability to bring people together that will be especially important in 2021 and the years to come. Their dual economic and social impact makes culture and heritage destinations like The Piece Hall fundamental to making good on the Government’s levelling up commitment.”

“The Piece Hall is a major part of Calderdale’s distinctive heritage and cultural story, cementing our place on the map as an international cultural destination. It’s fantastic to see the impact that this magnificent building, and the local talent within it, is having on our visitor economy and our local sense of pride and place. The iconic visitor attraction and event destination contributed to the record-breaking year for Calderdale’s tourism economy in 2019, with research showing that The Piece Hall creates £5.30 for every £1 invested. The historic building’s transformation kick-started the regeneration of Halifax, Calderdale and beyond. It makes a significant contribution to our Vision2024 for Calderdale and will now play a key role in our economic recovery from COVID-19, which will have culture and tourism at its heart.”