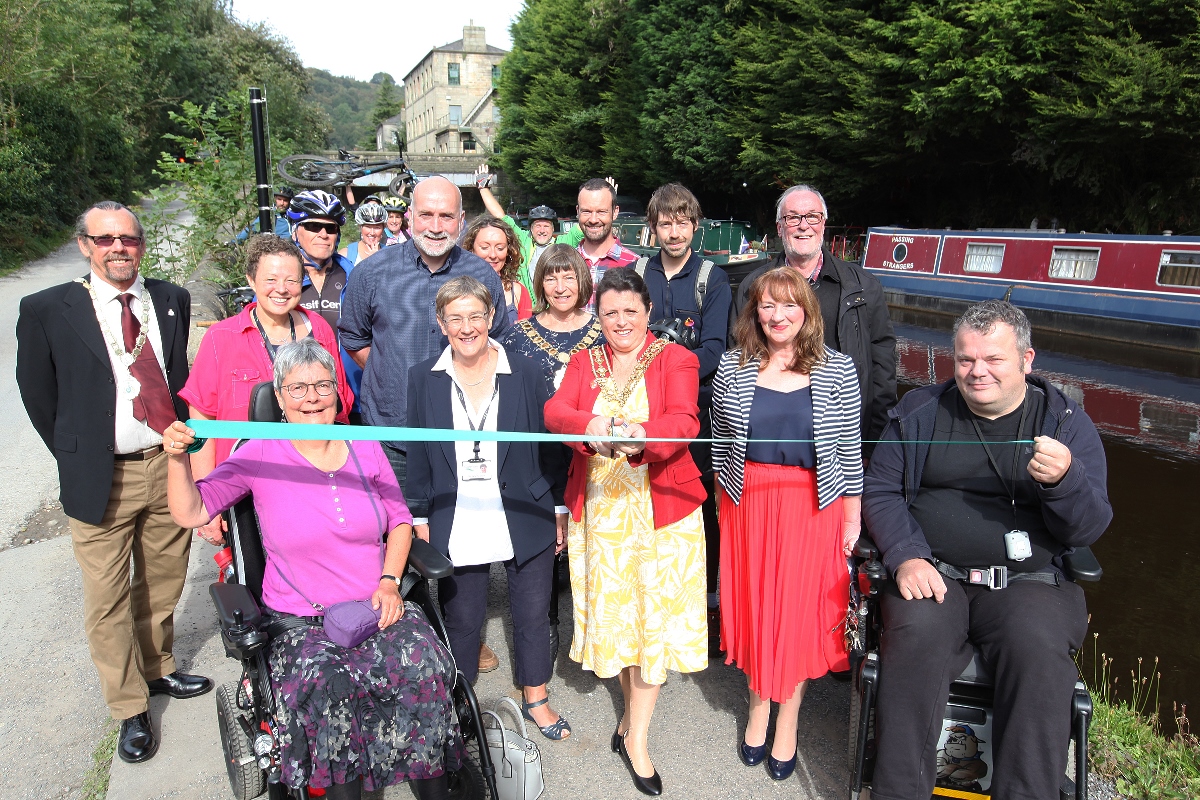 A stretch of towpath along the Rochdale Canal at Hebden Bridge was officially re-opened today (Saturday 14 September), following improvement works as part of a £2.9m package to boost cycling and walking access on four West Yorkshire canals.

The Rochdale Canal has benefitted from improvements to create a high quality 10km route linking Sowerby Bridge to Mytholmroyd and Hebden Bridge, as part of the West Yorkshire Combined Authority’s CityConnect programme aimed at encouraging more people to travel by bike or on foot, in partnership with Calderdale Council and the Canal & River Trust, the national waterway and wellbring charity that look after Rochdale Canal.

“We’re delighted to have worked in partnership with Calderdale Council and Canal & River Trust to improve this section of the Rochdale Canal, which will provide people travelling by bike or on foot through the valley with a safe, scenic traffic-free route all year round.

“As well as providing missing links in local cycling and walking infrastructure, these improvements – alongside other schemes across the region – are helping open up access to some of our best countryside.

“We know encouraging more of us to travel by bike or on foot not only boosts people’s health and saves individual’s money, it also brings wider environmental and economic benefits for us all, which is why we want to make cycling and walking a natural choice for short, everyday journeys.”

“I use the towpath daily, for cycling and walking my dog, and I’ve already seen an increase in people using this much improved facility between Sowerby Bridge and Hebden Bridge. People are really benefitting from this investment and I’m sure it will encourage further use of active travel methods as an attractive alternative to driving along the busy A646 road.

“With more people using this safer, traffic-free option it will also help us achieve better outcomes for air quality, complementing the council’s ongoing work to tackle air pollution and supporting the continued fight against climate change.”

“The canal is right on my doorstep and this means I can get up and down the valley to where I need to be more quickly and safely. Now the surface has been upgraded I arrive cleaner and drier whatever the weather.”

Six years ago Rob was diagnosed with a rare form of Leukaemia.

“Cycling has been a bit of a saviour really,” he said. “It’s allowed me to take up physical exercise again which has helped me reconnect with the rest of the world rather than staying at home.

“You can tend to feel a bit sorry for yourself but actually being able to get out on your bike and feel the wind on your face makes a lot of difference, and the more you do the more you feel able to do. Cycling has rebuilt my confidence from what was obviously a big surprise and a big knock-back.”

Work is currently underway on a £2.1m scheme to improve cycling and walking access on a 6km section of the Rochdale Canal towpath between Hebden Bridge and Todmorden, which is due to be completed this winter.

The upgraded towpath, which is to form part of the Calder Valley cycle route, will add to those already constructed and under construction in the area, ultimately providing a continuous off-road route from Brighouse to Todmorden for people travelling by bike or on foot.

The Rochdale Canal is part of a wider package of canal towpath improvements delivered across the region through the CityConnect programme, including between Huddersfield and Milnsbridge on the Huddersfield Narrow Canal, and between Silsden and Riddlesden on the Leeds Liverpool Canal as part of the Airedale Greenway.

Improvements to a 2km section of the Calder and Hebble Navigation Towpath between Sowerby Bridge Basin and Hollas Lane Bridge, linking to the existing Calder Valley Greenway, provides a traffic free cycling and walking route towards Halifax, Elland and Brighouse.

The schemes are funded by the Department of Transport (DfT) and delivered by the Combined Authority’s CityConnect programme in partnership with the Canal & River Trust, the charity which cares for the Rochdale Canal, and local authority partners.

“Our charity is passionate about enabling people to spend more time by water, which we know is good for your mental health and physical wellbeing. That’s why we’ve been working in partnership on this project to help the local communities that surround the Rochdale Canal, as well as the thousands of visitors who come to enjoy this area of the Pennines.”

From route information to free adult cycle training and bike maintenance sessions, online cycle challenges and support for businesses, find out how CityConnect can help you at www.cyclecityconnect.co.uk(external link)