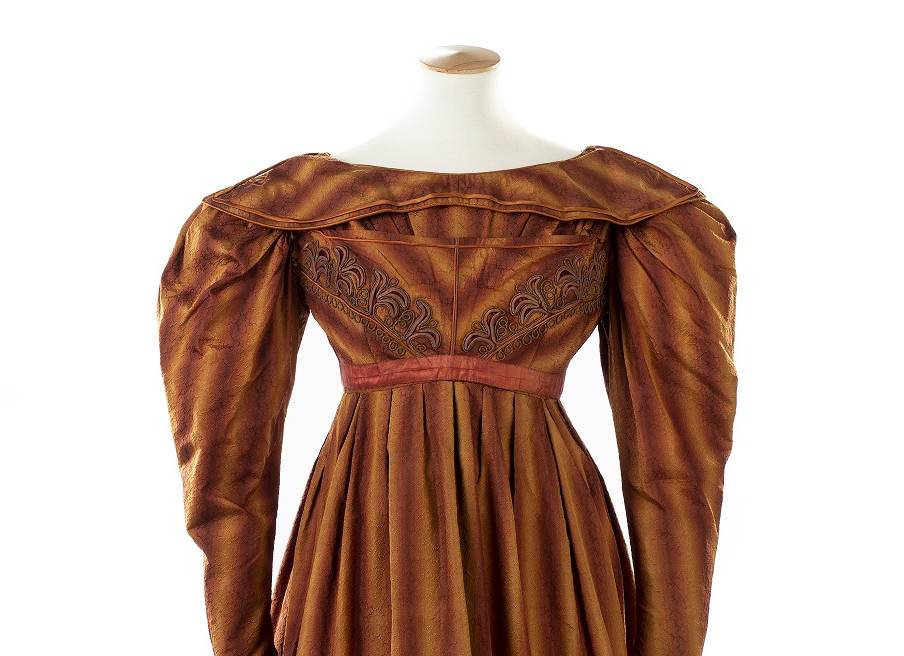 Bankfield Museum in Halifax is opening a new exhibition exploring the different styles of fashion during the lifetime of the town’s famous resident, Anne Lister.

‘Fashion in Anne Lister’s Time (1791-1840)’, will explore the many different styles of fashion during Anne’s lifetime and demonstrate just how her own unique style contrasted with what women of that time were expected to wear. It will be opened by the Mayor and Mayoress of Calderdale on Saturday 26 March 2022 at 10am and everyone is welcome to attend this opening event.

A selection of fascinating 1830s dresses and accessories from Bankfield Museum’s world class collection of costumes and textiles will be on display, along with many items loaned from museums across the country.

These loans include a selection of locally made dresses from Bradford Museums and Galleries and Kirklees Museums, shoes and an evening dress from Northampton Museum, and day dresses, accessories and a bodice from North Lincolnshire Museum Service and Harrogate Museums. There are also loans from current makers, including an 1830s evening dress by dressmaker, Anja Huddart, that won the Costume Society Patterns of Fashion Award 2021. Milliner, Lauren Martin has made an 1830s bonnet especially for the exhibition and historical costume maker, Richard Macfarlane has made a man’s 1830s style coat.

In addition, an iconic 1830s costume from the 1999 BBC production of Wives and Daughters worn by actress Rosamund Pike will be on display alongside a specially commissioned wig made by Lynn Kelly, a professional wig maker. The design is based on a hairstyle called the Apollo knot that was popular in the 1830s and is trimmed with feather, beads, and ornaments.

There will also be a world exclusive exhibition of costumes used in the filming of the second series of the BBC Drama, Gentleman Jack. These will go on display once the final episode of the second season has aired. This follows on from the highly successful exhibition of series one costumes at Bankfield Museum in 2019. More details will be available once the BBC release date is confirmed.

“This fascinating exhibition will explore the styles and fashions from the time of Anne Lister, featuring a wide selection of period costumes from the early to mid-19th Century.

“Visitors will be able to see exquisite pieces from Calderdale museums’ own collection as well as further items on loan from museum collections across the country. Fans of Anne Lister and Gentleman Jack will be able to see just how unique Anne’s style was for the time, and also gain further appreciation of the costume design in the series.

“Later this year, fans will receive a further treat, as the exhibition will develop to include fashions worn by the cast in the much-anticipated second series of the hit programme.”

“I really wanted to be able to show the richness of this period with all the large sleeves, intricate patterns, flamboyant bonnets, wonderful waistcoats, and lots more!”

Fashion in Anne Lister’s time opens at Bankfield Museum on Saturday 26 March 2022 and will be on display until 24 December 2022.

Bankfield Museum opens Tuesday to Saturday from 10am- 4pm. A visit to the exhibition is perfectly combined with a look around Bankfield Museum’s other fascinating exhibits and a trip to nearby Shibden Hall and other Calderdale attractions(external link).