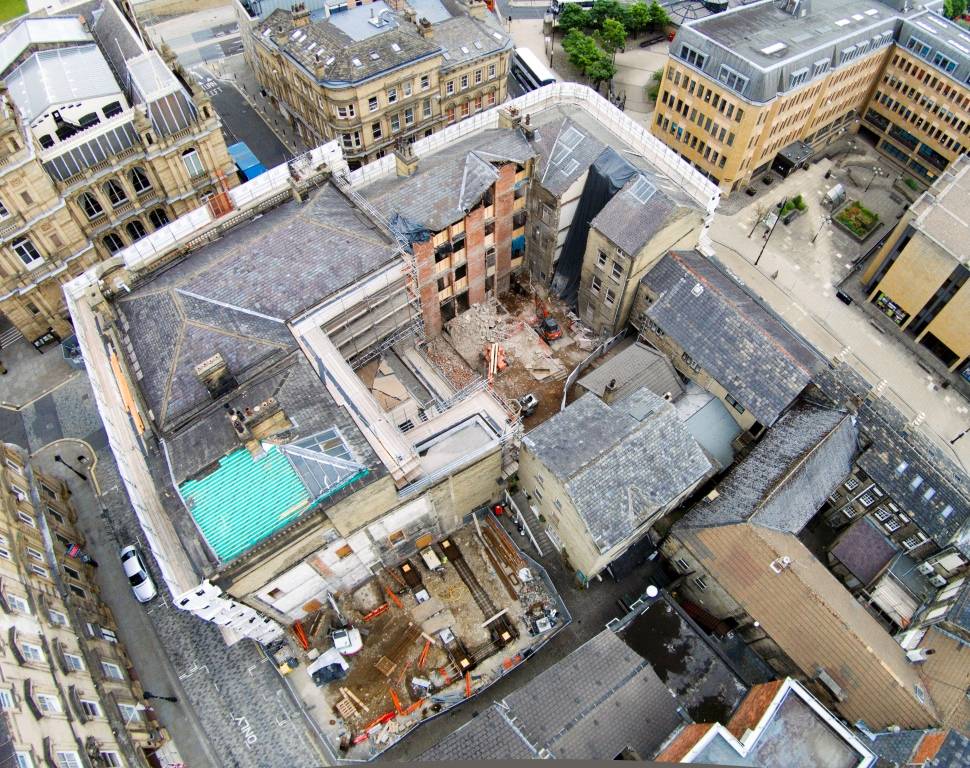 The renovation of the historic Princess Buildings in Halifax is well underway.

The work will see a modern office environment provided whilst preserving significant heritage features, and people will be able to see the new extension taking shape over the next few weeks.

The Grade II* listed building is being refurbished as part of Calderdale Council’s work to make better use of its offices in the town centre.

The aim is to save £7.6 million by operating from fewer buildings, using modern technology and working in new ways to deliver services more efficiently and effectively.

Princess Buildings is the last of the three town centre offices to be refurbished under the scheme. Halifax Customer First opened in November 2013 and the renovation of Westgate House was completed and occupied by staff from various sites in April 2014.

The contractor working on Princess Buildings, ISG, started on site in January 2015. The project is due to be completed by spring 2016, when staff will move in from a number of other sites.

The renovation’s next key milestone is a new construction to replace the 1960s extension, which was demolished at the start of the project. The new extension will have a better blend with the original 1800s building, with materials and features that are sympathetic to its heritage. For example, the new stone, which is from Huddersfield, will complement the colour and design of the original.

The rebuild and the delivery of the stone in September will see a large crane working on site. To allow this to happen safely and effectively, Princess Street will be partially closed on 11 October 2015 and fully closed on 18 October 2015.

In addition to removing the old extension, lots of work has been taking place over the last seven months, including structural works, roof repairs, new guttering and refurbishment of existing facade windows. ISG has carefully stripped out the buildings to unify floor levels, with a mechanical and electrical upgrade being undertaken to create modern, highly-efficient systems that will dramatically reduce running costs.

Great care is being taken to preserve historic features such as the beautiful exterior architecture, window frames, old banking safes, doors and the spectacular timber-lined staircase that winds its way through the inside of the building. The Council is working with Historic England to ensure the work is sensitive to the building’s listed status.

The dated interior is being brought up to modern standards, with better energy efficiency, improved access, greater capacity and new technology. This will increase the number of Council staff able to work ‘smarter’ to provide services more efficiently and effectively. Over 1000 employees have already transformed the way they work thanks to the redevelopment of offices.

“It’s really exciting to see the renovations at Princess Buildings taking shape. The end result will be a perfect blend of old and new. We are keen to preserve the fabulously quirky heritage features, but also bring the working environment right up to date. This is the final step in the transformation of our office buildings in Halifax town centre, and will go towards saving nearly £8 million. There will be a larger number of staff working more efficiently and effectively, and more staff in the town centre means increased spending in local shops. The project is also part of the wider regeneration work in the town.”

“The Princess building redevelopment project involves temporary road closures and diversions and we have worked extremely closely with Calderdale Council and its officers to ensure that the changes to existing traffic routes are being undertaken as efficiently and effectively as possible to minimise impact on the area.”