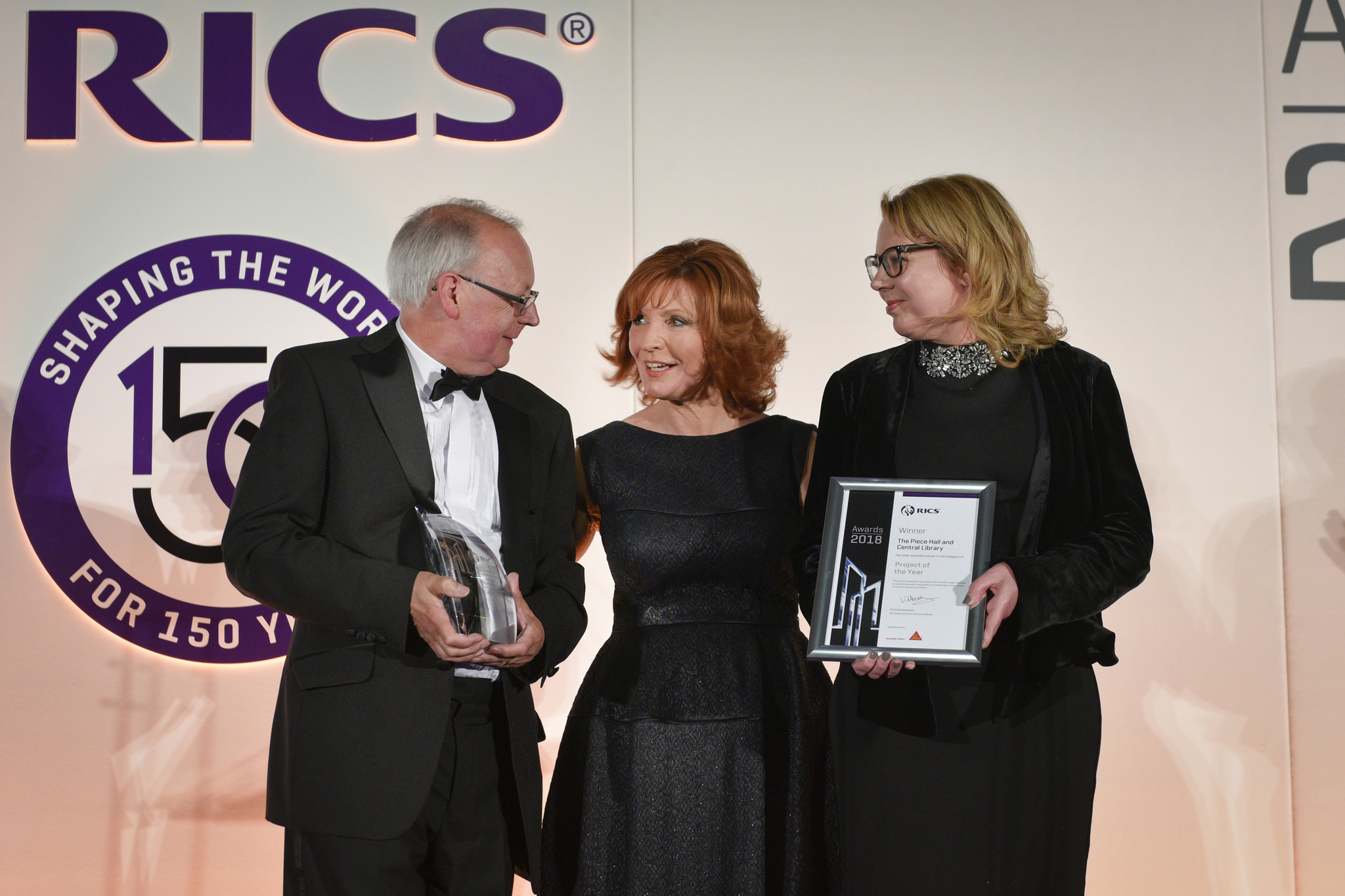 Another week, another accolade for Halifax, as The Piece Hall and The Central Library and Archives scooped both the Regeneration and Yorkshire Project of the Year awards at the regional RICS Royal Institution of Chartered Surveyors(external link) Awards 2018.

The RICS Awards showcase the most inspirational initiatives and developments in land, real estate, construction and infrastructure. Over 45 projects across Yorkshire and Humber were nominated for the awards, which were presented at a ceremony in Leeds, hosted by Look North presenter Claire Frisby.

The transformation of Grade I listed The Piece Hall and the state-of-the-art Central Library and Archives impressed judges who said that The Piece Hall and Central Library was a stand-out ‘Project of the Year’ winner and praised the project team behind it – including Calderdale Council, LDN Architects, Gleeds and Graham Construction – for creating a vibrant new cultural and commercial centre that has attracted quality eateries, boutique and unique shops, and an array of events.

The judges also recognised the project for attracting significant public and private sector funding, and for successfully combining both new build and the significant restoration of heritage assets to an exceptional standard.

“It seems not a week goes by without The Piece Hall receiving another prestigious accolade and the RICS awards are fantastic additions to the growing trophy cabinet.

“I’m delighted that the awards also credit the state-of-the-art Central Library and Archives, which has totally transformed a previously derelict site and created a 21st century library facility for Halifax.”

“I am honoured that The Piece Hall has received these awards. The Piece Hall is a spectacular building and has been beautifully transformed, complimented by the new Central Library.

“The Piece Hall Trust team has been focused on creating a destination that the people of Calderdale love and that attracts national and international visitors, offering a wide range of events, quality independent shops, bars and eateries all within this spectacular building.

“Being named Yorkshire Project of the Year and receiving awards such as these, combined with the fact that we are fast approaching two million visitors in nine months, shows that we are well on our way to achieving our goal of becoming a world class destination.”

“It’s fantastic to see The Piece Hall brought back to life and transformed into such a spectacular cultural venue that Halifax residents and visitors are rightly very proud of. The project exemplifies culture-led regeneration and I’m delighted the team behind it have been recognised for realising the true potential of The Piece Hall.”

“The project is already attracting significant footfall and new business activity to the area, whilst also having a positive impact on businesses within the town centre, making The Piece Hall and Central Library a highly deserving Project of the Year winner and a valuable asset to Halifax.”

The stunning new Central Library and Archives has been wholly funded by Calderdale Council and incorporates the old Grade II* Square Church building including the spire and the beautifully restored Square Church rose window.

The Piece Hall and Central Library and Archives will now be entered into the national RICS awards and compete to be overall category winner and for the ultimate accolade — Project of the Year 2018 — at the RICS Awards 2018 Grand Final, to be held in London in November 2018.