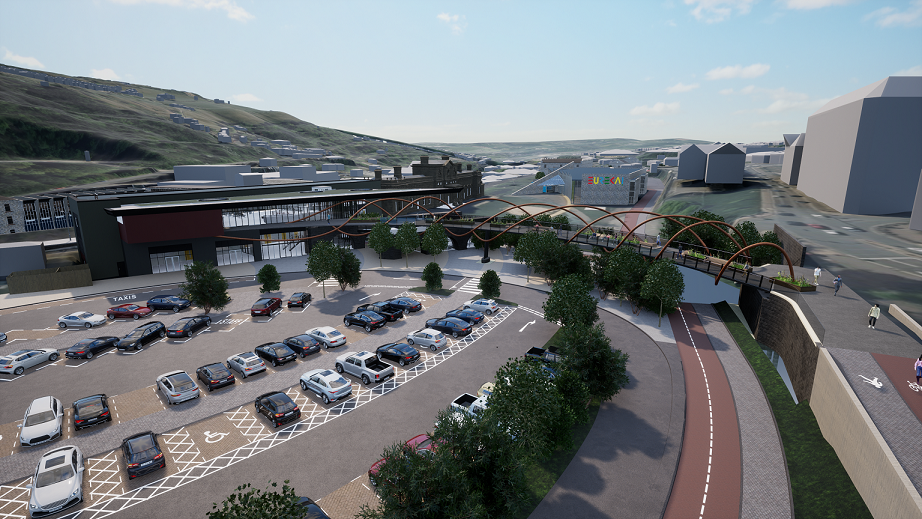 Plans are on track to improve Halifax Rail Station and the surrounding area, with feedback from a recent consultation being used to shape the project.

Calderdale Council, in partnership with Network Rail, is developing plans to transform the station building and improve access and its facilities.

The £30million-plus project, which is being funded by the West Yorkshire Combined Authority, includes plans for a new two-storey station building, with comfortable waiting lounges on both the ground and first floor level, improved toilet facilities and opportunities for additional retail options.

Access to the station will also be improved with a modern pedestrian bridge providing step-free access to and from the town centre. An historic underpass beneath the station would also be reopened to improve access to the eastern side of the rail station.

To help inform and develop detailed proposals for the project, a public consultation took place from November 2021 to January 2022. The scheme’s proposals were available to view on the Combined Authority’s Your Voice web page, along with feedback surveys. Paper copies were also available from outlets within Halifax town centre.

480 responses were received, with over 77% stating that they were either happy or very happy with the proposed improvements. Over 66% of respondents also said that the improvements would encourage them to use the rail station more often.

As part of the consultation, meetings were also held with local interest groups, where feedback to the proposals was also positive.

All the feedback received in the consultation is being used to refine designs for the project ahead of the planning application being submitted later this year. Further opportunities will be available for people to have their say on these detailed proposals, prior to construction.

“As the gateway to the town, it’s important that Halifax Rail Station is a welcoming, accessible and fit-for-purpose facility. The proposals to improve the station and surrounding area will make a real difference and complement extensive investment around Halifax town centre.

“The positive feedback on the latest proposals from the recent consultation exercise has helped reassure us that the plans are on the right track. The comments received will be really useful in helping us develop detailed designs, ensuring that the improvements meet the needs of those using the station.

“It was particularly reassuring to see that so many respondents said that the improvements would encourage them to use the station more. Something that fits with our work to encourage sustainable travel, reducing carbon emissions and helping to tackle the climate emergency.”

“I want to grow our economy, connect more people with opportunities and tackle the climate emergency on our way to becoming a net zero carbon economy by 2038.

“We need a reliable and efficient transport system to do this and transforming Halifax Rail Station is a great example of how we are working in partnership to make West Yorkshire an even better place to live, work and flourish.”

“We are pleased to be working in partnership with Calderdale Council on this scheme. It’s going to make it easier for people to move around our region and I would like to thank everyone who made the most of this opportunity to help shape the plans by taking part in the public consultation.”

The scheme has received more than £30million from the Leeds City Region Transforming Cities Fund (TCF) and West Yorkshire Plus Transport Fund (WY+TF) programmes. The TCF is a major new programme of transport infrastructure investment aimed at providing a viable alternative to car journeys. Find out more information at www.westyorks-ca.gov.uk/TCF(external link)

Improvements to the station and surrounding area are part of the Next Chapter for Calderdale to enable economic growth, reduce inequalities and build a sustainable future. For more information about this and other exciting developments in Calderdale, visit www.calderdalenextchapter.co.uk(external link) and follow #CdaleNextChapter on Twitter.