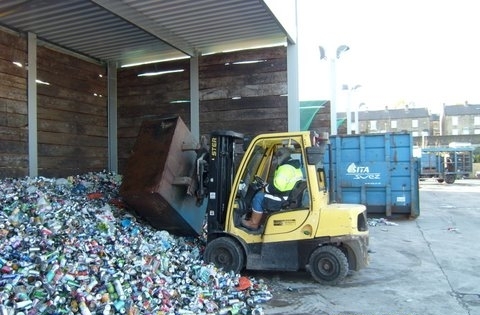 Calderdale Council has leapt to the top of the charts for household waste recycling in Yorkshire and Humberside for 2012/13.

Recently released figures show that Calderdale is leading the way in recycling, with a household waste recycling rate of 60.61%. We are the only authority in the Yorkshire and Humber region that is recycling over 60% of waste, and one of only 9 authorities in England to achieve this feat.

The improving performance is partly due to the Council awarding a contract to local firm Associated Waste Management (AWM). The majority of the borough’s residual waste is now processed at AWM’s Super Materials Reclamation Facility (MRF) at Gelderd Road, Leeds.

By using this facility, Calderdale has managed to recycle an additional 16,000 tonnes of waste due to the impressive performance of the site, adding a further 21% to the recycling rate, with a similar amount sent for energy recovery, a form of treatment which converts waste into heat or electricity.

The site has also provided further benefit to Calderdale by diverting waste from landfill sites. The latest recorded figures show only 16% of Calderdale’s waste was disposed of in landfill during 2012/13, a massive improvement considering over 70% was sent to landfill as recently as 2008. This helps cut down on greenhouse gas emissions, and reduces the level of Carbon Dioxide and Methane releases drastically, helping climate change targets.

The waste collection and recycling service in Calderdale has been operated by SITA UK since 2008, and during this time it has evolved from a black bag, door collection system to encompass wide ranging recycling opportunities. The current scheme, which was introduced in 2009 (with slight modification in 2011), involves alternate weekly collection of refuse, with a weekly recycling service for glass, cans, paper, plastic bottles, textiles and food waste collections.

“It’s fantastic news that Calderdale has topped the leader board for recycling in Yorkshire and Humberside. The hard work of the Council’s waste team, our contractors SITA UK and Associated Waste Management and, most important of all, the co-operation of local residents’ must be applauded for this outstanding performance.

“We are determined to keep climbing the recycling rate table nationally as well as regionally, and we’re keen to explore further improvements in future waste contracts which may include additional recycling opportunities offered to householders.”

“AWM are proud to work and be associated with Calderdale Council as a recycling partner. Delivering an ever-evolving service that attains such achievements can be directly attributed to our committed approach to increasing technological development in Yorkshire.”

“We look forward to implementing strategies to realise a continual progression in recycling and recovery performance levels for all our clients.”

“We would like to congratulate Calderdale on this remarkable achievement which is a direct result of the strategy that the Council has adopted.”

Attached photo: Recycling in action at High Level Way in Halifax- a photo of cans being emptied out of the container from the recycling wagon. They are bulked up in this bay and loaded onto a larger vehicle for delivery to the re-processor.