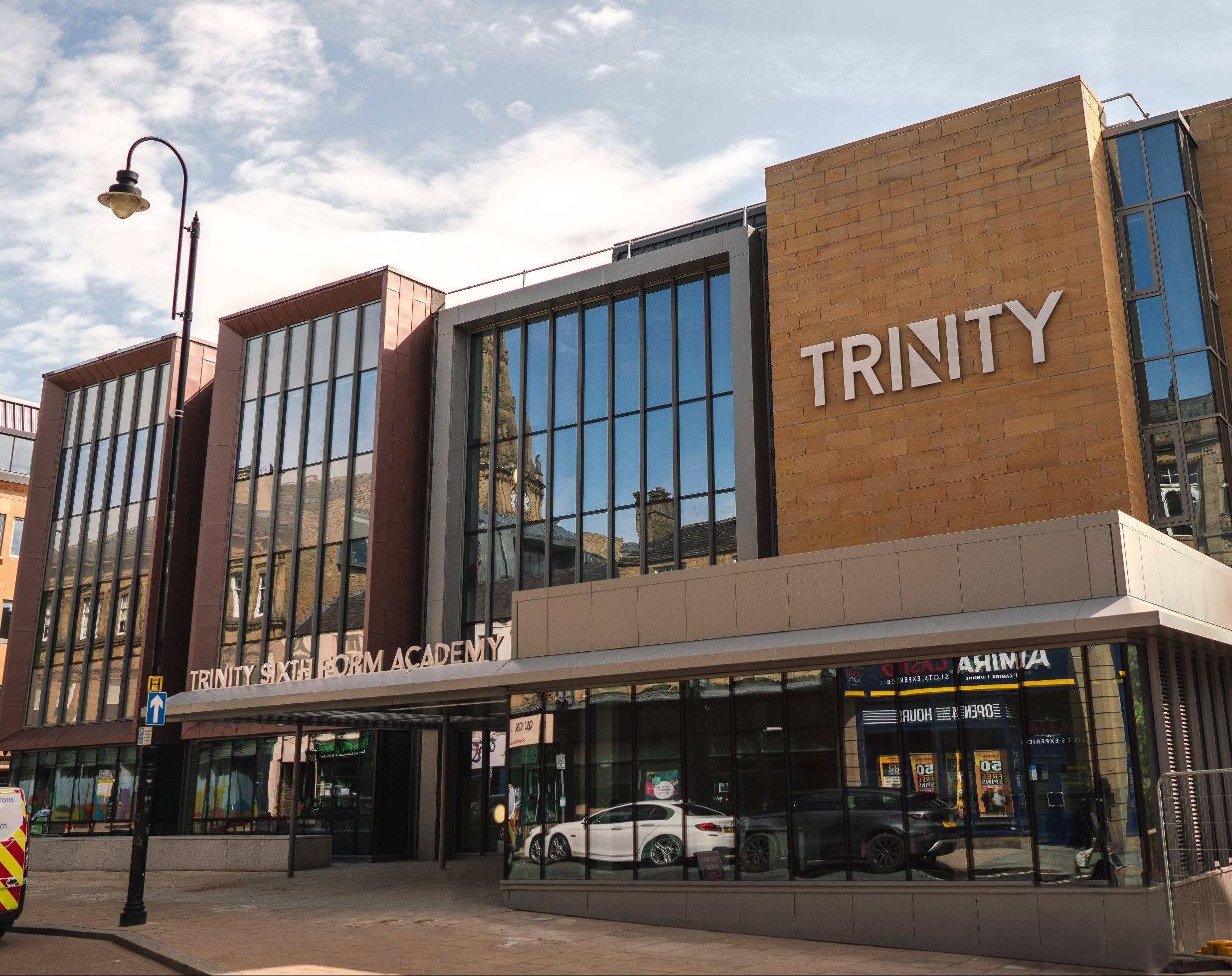 Two innovative landmarks in Halifax have been honoured with the top prize in the Halifax Civic Trust Awards.

The awards recognise high-quality design and craftsmanship in schemes in Halifax and the surrounding countryside. Sadly, the awards were unable to go ahead in 2020 due to the pandemic, so two winners were announced this year – one for 2020 (The Duke of Wellington’s Regimental Memorial) and one for 2021 (Trinity Sixth Form Academy). The Welcome Garden at All Saints Church in Halifax also received a commendation.

“We are delighted that two of Calderdale’s key landmarks have been recognised in the prestigious Halifax Civic Trust Awards.

“We’re proud of the regeneration across the borough, and how partner organisations work together to preserve our distinctive heritage in modern and enterprising ways. The Duke of Wellington’s Memorial and Trinity Sixth Form Academy are two outstanding examples of this work in action, and I’d like to thank and congratulate everyone involved.”

“It’s good to celebrate our achievements in Halifax and the quality of the entrants this year has been exceptional. The excellent memorial and complex transformation to create the Academy both bring life and vitality to the town centre, while the Welcome Garden at All Saints provides a valuable and appropriate open space for the community.”

On Friday 17 May 2019, a unique and significant memorial commemorating The Duke of Wellington’s Regiment’s 304 years of service to the Crown was unveiled in the heart of Halifax, home to the Regiment for over 200 years.

Standing where The Woolshops Shopping Centre joins Market Street, the 18-ft statue recognises the service of over 205,000 men who served their country, as well as the families who supported them, and the West Riding of Yorkshire from where so many were recruited. The celebratory piece honours the sacrifice of those who gave their lives and is a lasting national legacy to inform future generations of the history of the Regiment and those who served.

The memorial quickly became an established landmark in Halifax town centre and showcases skilled craftsmanship from chief sculptor, Andrew Sinclair; strong partnership working between the Duke of Wellington’s Regimental Association and Calderdale Council; Calderdale’s distinctive heritage; and the kindness of the community to help raise funds for the Memorial Appeal.

The Halifax Civic Trust hopes to hold a ceremony later this year to unveil the oval plaque which will be located on one of the wing walls, not on the sculpture itself.

The Civic Trust judges named Trinity Sixth Form Academy as 2021’s winner, as they were impressed with the complex refurbishment of the former Central Library building on Northgate in Halifax town centre.

Calderdale Council handed the transformed building over to Trinity Multi-Academy Trust in June 2020. The Council started work on site in 2019 and continued throughout the challenges of the pandemic, in partnership with Trinity Multi-Academy Trust, Rastrick High School, LDN Architects, blacc (the Council’s construction contractor, based in Halifax) and a range of small, local contractors.

Trinity Sixth Form Academy welcomed its first students in September 2020, adding to the existing post-16 options in Calderdale and helping to boost the vibrancy and prosperity of the town.

The judges commended the project team’s ability to overcome the unique design challenges involved in repurposing a library into a high-quality, light and airy, modern learning facility. They praised the project for bringing new life and activity into the town centre, which is particularly important in the COVID-19 recovery.

The new Central Library adjacent to The Piece Hall, which replaced the former facility at Northgate where the new sixth form centre is located, is a previous winner of the Halifax Civic Trust Awards.

The Welcome Garden at All Saints Church on Dudwell Lane also received a commendation. The Halifax Civic Trust team who visited the site were impressed by the community support for this scheme, that it had been project managed on a voluntary basis, the intelligent design that had fulfilled the objectives and the continuing support for maintenance. As COVID-19 restrictions are eased, it will come into its own in an area that has a shortage of green space. To ensure the scheme’s continued attractiveness, grass maintenance is carried out by Calderdale Council and a team of volunteers look after the borders.