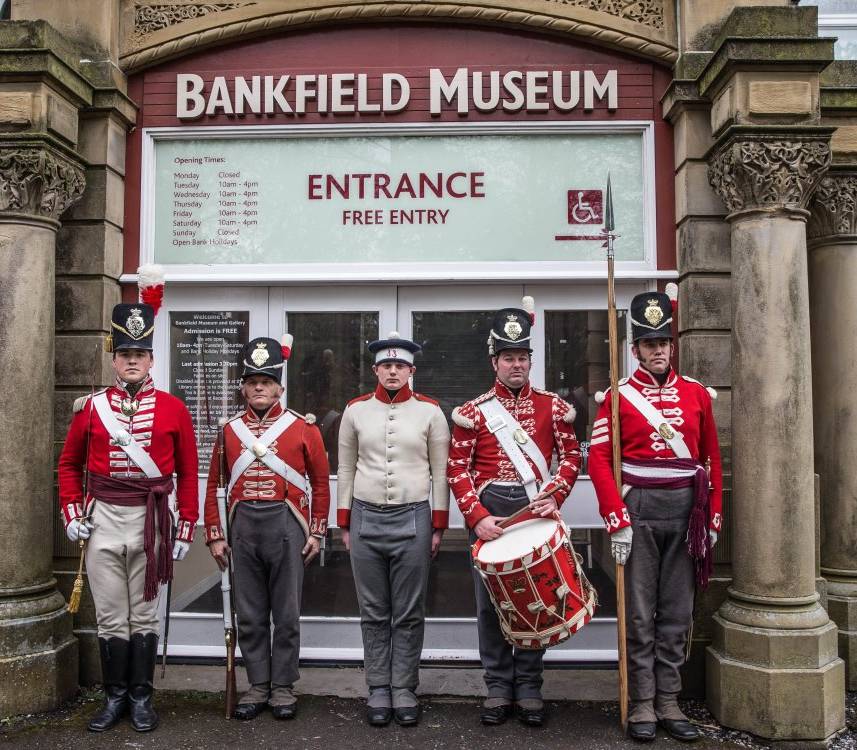 In the run-up to the 200th anniversary of the Battle of Waterloo on Thursday 18 June, people are being reminded that they can commemorate this defining historic moment in a variety of ways.

Calderdale Council and the National Army Museum have teamed up to host a special exhibition at Bankfield Museum, which opened on Saturday 2 May and runs until Saturday 25 July 2015. So far, nearly 1,500 people of all ages have visited the exhibition and the feedback has been very positive.

Waterloo Lives: Wellington’s Redcoats tells the story of the Battle of Waterloo through the ordinary men and women who experienced one of the most dramatic and decisive battles ever fought by the British Army. Visitors can see historic objects including a bullet-holed cap worn by an officer in the 33rd who later became The Duke of Wellington’s Regiment, original weapons and paintings from the time of the battle. There is also a rare opportunity to see the Duke of Wellington’s own Waterloo medal and original ‘Wellington Boots’.

An interactive activity programme for schools inspired by the exhibition is taking place throughout June. Pupils will be meeting a Redcoat in full military kit and exploring paintings from the period.

Bankfield Museum was chosen as the only site in Yorkshire to host a Waterloo Lives exhibition. It commemorates The Duke of Wellington’s Regiment at the Battle of Waterloo. The Regiment has a long association with Halifax – the Duke’s regimental museum is located in Bankfield Museum and the Regimental Chapel is in Halifax Minster.

The exhibition is just one of a range of ways that people can come together to mark two centuries since the conflict. Events taking place include:

Watch the Yorkshire Regiment parade through Halifax as they are granted the Freedom of Calderdale. As well as marking the 200th anniversary of the Battle of Waterloo, it will be 70 years since the granting of the Freedom of Halifax to the ‘Dukes’ on 18 June 1945 at the end of World War II. The Mayor of Calderdale, Cllr Lisa Lambert, will formally present the Freedom of the Borough to the Yorkshire Regiment at a private ceremony on 20 June at the Town Hall in Halifax, where a plaque will be unveiled to provide a permanent record of their Honorary Freedom.

A free public event at Manor Heath Park, Halifax, where there will be a musical re-enactment of the part the 33rd played in the battle with music by the Yorkshire Regiment Band.

“It’s great to see so much happening in Calderdale to mark the Battle of Waterloo. It’s such a significant part of military history and we know how important it is to local people to honour those who died in action, especially because of the long association of the Duke of Wellington’s Regiment with Halifax.”

“The Duke of Wellington’s Regiment, whose home is here in Halifax, is a direct link to those men from our towns and villages who fought in the critical Battle of Waterloo with such courage and sacrifice. I very much hope as many as possible from our local community will be able to join us in commemorating their achievements at the parade in Halifax to mark the granting of the Freedom of Calderdale on our successor regiment, the Yorkshire Regiment, and afterwards at Manor Heath Park where there will be musical re-enactment of the 33rd at the Battle of Waterloo.”

“I’m delighted the Minster is able to host this special Flower Festival to mark the anniversary of the Battle of Waterloo. The Dukes recruited most of the men who went to fight from Halifax and the old West Riding. It feels right as the Colours hang in the Minster that we should still remember those who gave their lives all those years ago.”

Visit www.museums.calderdale.gov.uk to find out more about the exhibition and events and to plan your visit.