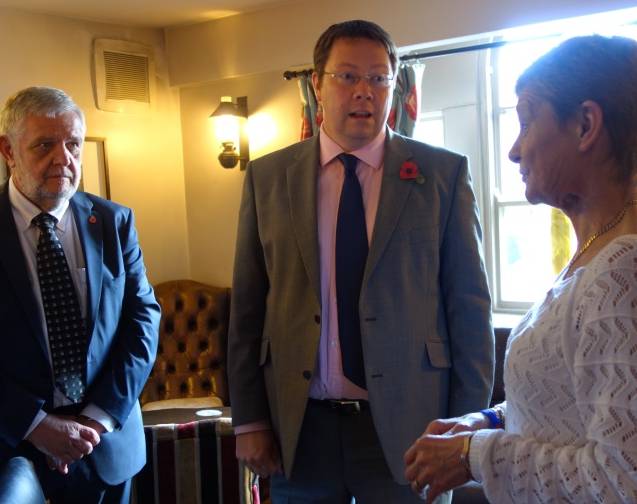 On Monday 3 November 2014 the Environment Minister, Dan Rogerson, visited parts of the Upper Calder Valley affected by unprecedented floods in 2012 and further flooding in 2013.

More than 1000 homes and businesses were damaged. A great deal of progress has been made in the last two years to reduce the risk and impact of future flooding in the area, as Dan Rogerson found out when he met with people including Calderdale Council’s Leader and Chief Executive, flood-hit businesses and local flood groups.

During the visit, organised by Calderdale Council, the Environment Minister saw examples of the great work carried out by the Calderdale Flood Recovery Programme – a partnership led by the Council which includes the Environment Agency, Yorkshire Water and local community groups.

The Minister’s first stop was the flood store in Mytholmroyd, set up by the town’s flood group and stocked with emergency clean-up equipment for people to use during a flood. The store, plus two others in Hebden Bridge and Todmorden, is funded through a Defra grant awarded to the Council to help local people feel more prepared for flooding, through the ‘Pathfinder’ scheme. Hebden Bridge and Todmorden also have flood groups, consisting of local residents who are keen to make a difference. The three groups have put plans together on how they can respond before, during and after a flood.

The next stop was the Dusty Miller bar, hotel and restaurant in Mytholmroyd. Dan Rogerson met with licensee Anne Downie, who talked about the devastating effects of flooding. She said:

“Within just half an hour the whole ground floor of the pub was destroyed. We lost everything. People in the community were marvellous and helped us with the clean up, but we were out of business for about six and a half months. We now have flood defences thanks to a grant from Calderdale Council; we also have plans in place for dealing with future flooding, and business is picking up, but it’s frightening that we could be flooded again and unfortunately we don’t have flood insurance because the excess is so high. It’s good that the Environment Minister visited the Calder Valley as it raises awareness of the devastation that flooding can cause, and shows that our area is being taken seriously.”

After Mytholmroyd the Minister visited Hebden Bridge Town Hall to talk to representatives including Calderdale Councillors, the Environment Agency, flood group members, local businesses and residents affected by flooding. He heard first-hand accounts of their experiences of flooding, and found out more about the Council-led £310,000 Defra-funded Pathfinder scheme to help prepare the community for future floods.

Dan Rogerson learned about the work carried out by the Council and partner organisations after the flooding. That includes the initial recovery and repair works until March 2013; the production of a detailed programme of work from April 2013 to March 2014; and the current phase which is about longer term investment into flood reduction schemes worth £3 million. Part of the discussion was about future investment requirements for flood alleviation works.

The Minister ended his visit with a tour of flood-hit businesses in Hebden Bridge to discuss how they have been affected. He witnessed their great progress and resilience, but also the problems they face getting the insurance they need.

“I’m pleased that the Environment Minister visited the Upper Calder Valley. It was a valuable opportunity for him to experience first-hand the amazing community spirit, can-do attitude and resilience of residents and businesses. It was great to highlight the work that has already been done by the Council, other organisations and community groups to improve our flood defences and make our communities more prepared. But it was also important to emphasise that there is still a lot more to be done, and that we face major challenges in meeting the sheer scale of the costs already incurred – and to be incurred – for long-term flood prevention and reduction works.”

“We are spending £3.2 billion on flood management and defences over the course of this parliament. This Defra funded flood resilience project will make a real difference to the local community in Calderdale. It is a great example of how a community can work together to improve flood protection and resilience.

“Flooding can have a devastating impact on communities and businesses across the country and I would urge people to assess their flood risk ahead of this winter and take any necessary steps, however big or small, to help protect their homes and businesses where necessary.”