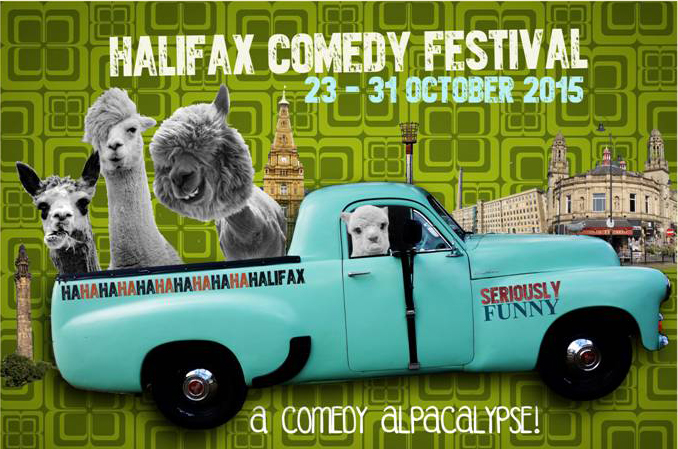 What do you get if you mix 10 days, one Yorkshire town, a huge dose of hilarity and over 50 events in 14 amazing venues? The inaugural Halifax Comedy Festival of course!

This major new festival for Halifax officially launches on Wednesday 15 July, building up to the main event over October half-term from Friday 23 to Saturday 31 October 2015.

The festival is the brainchild of the Victoria Theatre in Halifax, who, along with amazing friends and partners, has been working hard over the last 12 months to create what will be one of the largest comedy festivals in the region, establishing Halifax as a ‘seriously funny’ place to be.

Major names such as Andy Hamilton, Alistair McGowen and Jasper Carrott have already been announced, with many more household names to follow. Plus there will be 12 shows coming directly from the Edinburgh Fringe, so if you missed them there, there’s the opportunity to see them at the Halifax Comedy Festival.

Shows will be taking place in the following venues, all across Halifax:

And if all that wasn’t enough there will also be the Festival’s very own Hidden Theatre, with more details to be announced soon. Plus there will also a Festival Comedy Café running from 1pm at the Victoria Theatre all week where you can meet friends before or after a show, plan and book your Festival day or just relax and soak up the whole Festival vibe.

You’ll also start seeing a few alpaca images springing up around the town. County Alpacas from Sowerby Bridge are supporting this year’s Festival and will be out and about in Halifax during the Festival. Keep your eyes peeled for the comedy alpacalypse!

“It’s really exciting news that Halifax will soon have its own Comedy Festival. The Victoria Theatre already has a reputation for bringing world class comedy to Halifax, and the Comedy Festival will build on this, showcasing other fantastic Halifax venues and great comedy from both established and up and coming performers.

“So whether you’re into stand up, alternative fringe events or family-friendly workshops, you’ll find it all at the Halifax Comedy Festival, with a few surprises thrown in along the way of course!”

The official launch on Wednesday 15 July will also see the unveiling of the Halifax Comedy Festival website at halifaxcomedyfestival.com where you can also sign up for the newsletter to stay up to date with the latest news and events.

So what are you waiting for? Sign up on the website, follow us on Facebook(external link) and twitter @HxCFAlpaca (external link), tell your friends and get ready for Ha ha ha ha ha Halifax!