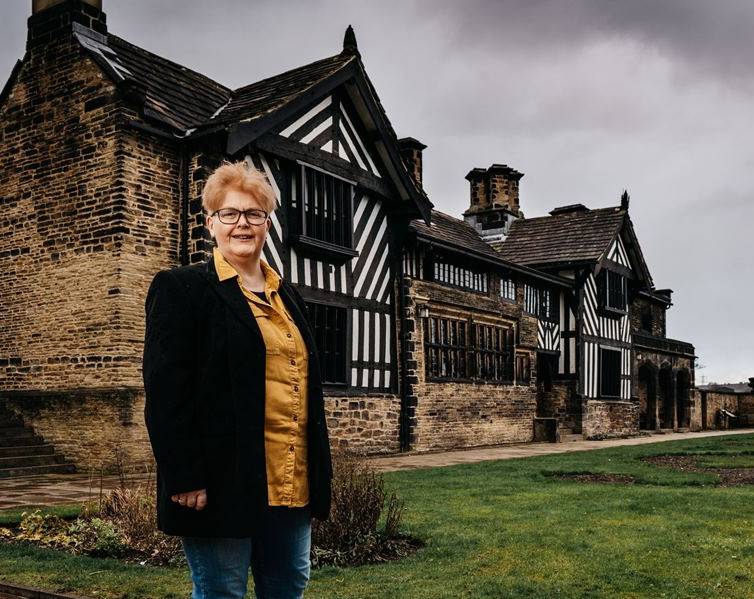 BAFTA-winning writer Sally Wainwright has been made a Freewoman of the Borough of Calderdale – the highest honour that Calderdale Council can award – in recognition of her extraordinary contribution to the area.

Sally has placed the beauty and distinctiveness of Calderdale firmly on the international map through her acclaimed TV dramas – Gentleman Jack, Happy Valley and Last Tango in Halifax.

In honour of the incredible impact that these works continue to have across Calderdale and beyond, Sally was granted Freedom of the Borough at a special ceremony at Halifax Town Hall on Wednesday 11 March 2020.

After speeches from the Mayor of Calderdale, Cllr Dot Foster; the Leader of the Council, Cllr Tim Swift; and the Council’s Chief Executive, Robin Tuddenham; and a special performance of O’Hooley & Tidow’s ‘Gentleman Jack’ by Calderdale Choir, Sally signed the Roll of Honorary Freedom and the Mayor presented her with the Freedom Scroll. The Honorary Freedom plaque, newly inscribed with Sally’s name, was then unveiled.

Amongst other privileges, Freedom of the Borough has traditionally been associated with recipients being allowed to herd sheep through the streets – why, we’re not so sure!

“I’m absolutely thrilled to become a Freewoman of the Borough, it’s a real privilege. The ceremony was a very special evening.

“I’m a huge supporter of Calderdale and I’m really excited about the place – it’s becoming more and more vibrant. When I discovered Anne Lister I completely fell in love with her distinctiveness, and Calderdale became magical to me. I love to write there. I’ve always felt really connected to Shibden Hall, Anne’s historic home. It’s a beautiful place.”

“It was a great honour to award Sally Freedom of the Borough. She so passionately champions Calderdale and has showcased its splendour around the world. All of her series filmed in the area have had outstanding impacts on tourism and the local economy.

“Gentleman Jack, which tells the remarkable story of Anne Lister, has boosted visitor numbers at Anne’s historic home, Shibden Hall, and the rest of the borough. The hugely popular BBC and HBO drama has brought millions of pounds into our economy, and has had phenomenal personal impacts – life-changing for many people – across the globe.”

Visitor numbers to Shibden have more than trebled since the Estate featured in Gentleman Jack. Visits to nearby Bankfield Museum in Halifax, where costumes from the series were on display last year, almost trebled. Local businesses, museums, hotels, events and attractions have reported an increase in income and there has been significant growth in the number of international visitors since the series first aired in spring 2019.

The impacts are set to continue, with a much-anticipated second series of Gentleman Jack on the way, and the fifth series of Last Tango in Halifax now showing on BBC One.