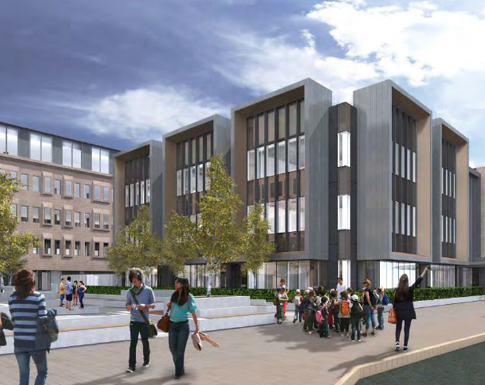 More details regarding the exciting plans to create a new sixth form centre in Halifax town centre have been released.

Trinity Multi-Academy Trust, home of the outstanding Trinity Academy Halifax (TAH) sixth form, is working in partnership with Calderdale Council and Rastrick High School to deliver Calderdale’s very own sixth form centre. It has announced that the new building, which will be housed within the multi-million pound refurbishment of the Northgate site, will be open to students from January 2020.  It will initially be able to accommodate up to 600 students, growing to 1000 students to meet increasing student demand.  Students who enrol to the current TAH sixth form provision will be educated at the Trinity Academy Halifax site from September 2019 and then relocated to the Northgate site in January 2020.

“I am delighted to have such interest in our new sixth form centre, which year 11 students in neighbouring schools can now apply to. The new building is such a transformational project, allowing more students to benefit from an outstanding sixth form provision in a state-of-the-art new building. At the start of the academic year, all sixth form students will be easily accommodated in our fantastic Trinity building, which has already been expanded to accommodate this. I appreciate that a small number of external students may have further to travel for a short period of time, but we have assured them that the Trust will provide free transport from Rastrick High School (and the town centre) to Trinity. It’s so exciting to think that, this time next year, our vision of having a Calderdale sixth form centre will be a reality.”

“As part of our Next Chapter transformation of the Northgate site and Halifax, we’re excited to bring a brand new, high-quality sixth form centre to the heart of the town centre. We want all our young people to be able to access a good education within Calderdale and to reach their full potential. The impressive new facility will help retain talent locally by giving young people more choice post-16; will increase the number of secondary school places across Calderdale; and will boost economic growth by increasing footfall and spending in the town. It’s an important part of our Vision2024 for Calderdale, making it an even better place to live, learn, work, invest and spend time.”