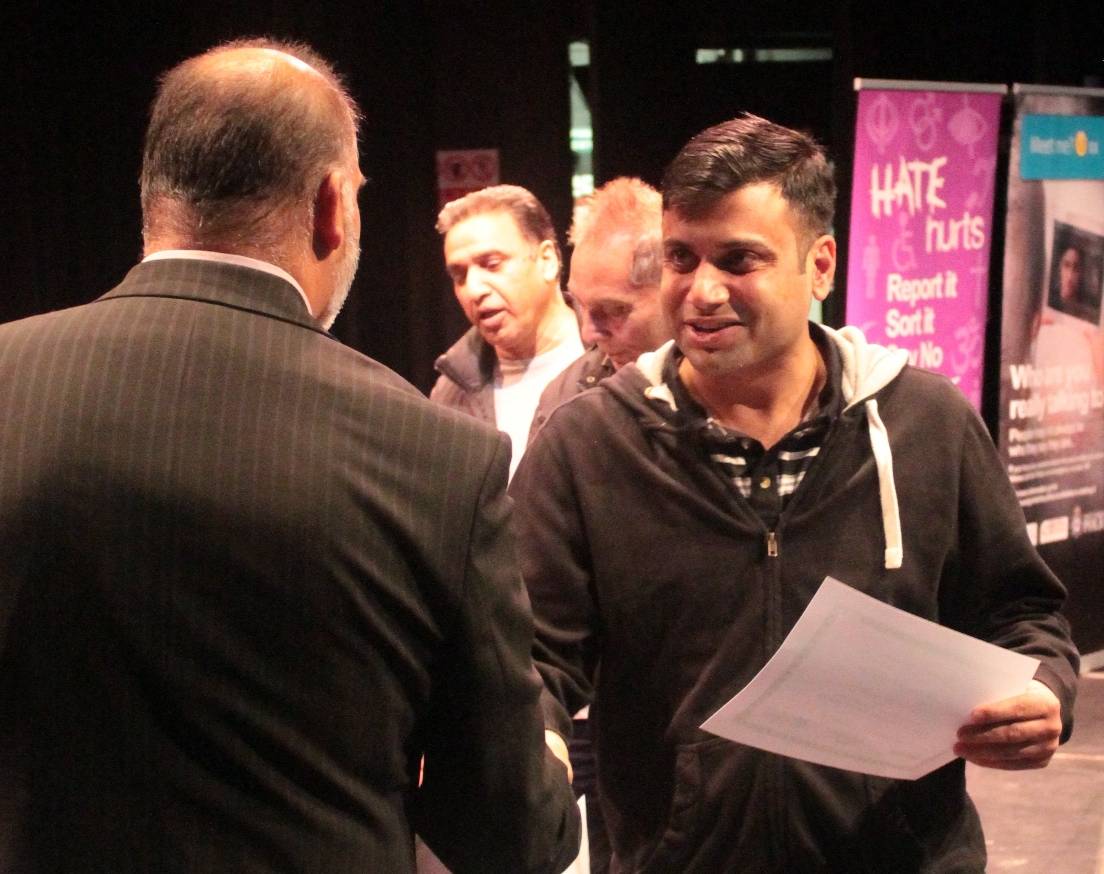 Over 1000 taxi drivers and private hire licence holders in Calderdale are now able to spot and report signs of child sexual exploitation (CSE).

After completing a training session organised by Calderdale Council’s Licensing team, they received their attendance certificates during a ceremony at the Victoria Theatre on Wednesday 21 October.

The event followed the delivery of the Professional Standards Training which was introduced in May 2015 – new four-hour sessions covering the key areas of responsibility for licensed drivers.

The drivers are now clued up on protecting children from CSE; recognising and reporting domestic abuse; disability and access for all; keeping safe and reporting incidents; maintaining a safe vehicle and being an ambassador for Calderdale.

The training was very well received by the drivers. Javed Iqbal from Woods private hire firm in Brighouse, said:

“I learned a lot from the training. It was really helpful in raising awareness of how to protect children. If I see anything of concern I know how to report it.”

The training is compulsory for all drivers who hold a licence in Calderdale. They must complete the course every three years to keep their licence. New applicants need to do the training before receiving their licence.

“Taxi drivers play an important role in the fight against issues such as CSE. They travel around our towns and see lots of different people every day. Thanks to the training, if they see or hear anything that doesn’t seem right, they know how to report their concerns. It was great to come together at the graduation ceremony to celebrate everyone’s achievements having successfully completed the course.”

The training is designed to improve customer service and protect members of the public and drivers. The Halifax Taxi Owners Association, the Private Hire Association, the Council and West Yorkshire Police worked together to plan the training.The sessions are delivered by West Yorkshire Police, Calderdale Council, the Calderdale Safeguarding Children Board and Nadeem Mir, the former Chief Inspector for Greater Manchester Police.

“Calderdale Police co-initiated this scheme to provide drivers with extra training in Calderdale and I believe it will help increase drivers’ awareness of the signs of child sexual exploitation.

“Everyone in our communities has a part to play in defeating CSE and due to their role, drivers are very well positioned to come across potentially suspicious activity. It is very welcome news that so many local drivers are now trained in helping spot the signs of this very serious offence.

“Tackling child sexual exploitation is the current number one priority for West Yorkshire Police. I would ask anyone who has information about CSE to contact the force on 101.

“Information and advice about how to spot the signs of grooming or child sexual exploitation can be found at the Know The Signs campaign on the West Yorkshire Police website.”