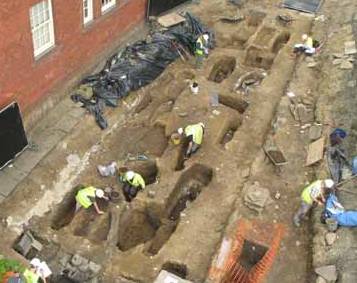 Archaeologists have removed and examined over 200 skeletons from the Square Chapel graveyard, as part of the Piece Hall transformation project in Halifax.

The excavations were undertaken by Archaeological Services WYAS as part of the £19 million transformation project funded by Calderdale Council and the Heritage Lottery Fund.

The exhumations were necessary before the construction of a new access road on the site as the graves were identified as ‘soft spots’.  Where soil had been removed and then infilled during the burials there was a risk that the land would not be able to bear the weight of the new road and could collapse.

Two hundred and seventeen skeletons were removed and 203 underwent osteological analysis, which examined the bones to reveal information about the diet and lifestyle of the people living in Halifax over 200 years ago.

“The analysis gives us a fascinating snapshot of life in Halifax around the time that the Piece Hall was built.  It’s very possible that some of the people who were buried in the graveyard even played a part in the decision to build the Piece Hall.

“This is an important part of our heritage, telling us more about the history of Halifax and its people and the story of the Piece Hall.”

The analysis shows that many of the children died in their early childhood.  It is likely that this was due to diet and the traditional childhood illnesses which were common at this time.

The team was surprised to find that one skeleton, of a young woman, had had the top of the skull removed and there are cut marks which show that it is likely that an autopsy was carried out to establish the cause of death, which was very unusual during this period.

The osteologists found that if people had survived their childhood they often lived to a good age, although young women were four times as likely to die as young men, which may have been due to complications during childbirth.  The names and dates listed on the gravestones also suggest that this was the case.

Generally the population of Halifax appears to have been healthy, with women outnumbering men in the community.  Overall people seem to have had a good diet, including plenty of fresh fruit and vegetables and enjoyed good living conditions, unlike the overcrowded slums of nearby Leeds or Manchester at this time.

However, the research showed that people did have a sweet tooth, as a large number suffered from tooth decay, suggesting they chose a diet high in sugar and refined carbohydrates.

The skeletons revealed that women were also more likely to suffer from infectious diseases, whilst men were more prone to traumatic injuries, possibly because of the working conditions of the time.

The analysis of the finds and the human remains indicate that the population was largely middle class. The burial register and the gravestones show that many of the people buried at Square Chapel worked in the wool and cloth trade, but other recorded occupations include attorney at law, architect, painter, joiner, shoe maker, wine merchant, property owner, porter, draper, tinner, hatter, apothecary, waterman, card maker and wool stapler.

“The Archaeological Services WYAS was proud to be involved in such an interesting and technically demanding project. The respectful exhumation of 217 burials from such a small area relied on us working well with all stakeholders.

“Coming face to face with perhaps some of the people who helped define Halifax in the late 18th and 19th centuries was a real honour and privilege.”

After the research was completed the skeletons were reinterred at Stoney Royd Cemetery in Halifax.

The Piece Hall transformation project is funded jointly by Calderdale Council together with a generous £7 million grant from the Heritage Lottery Fund. The Council is also very grateful to the Garfield Weston Foundation and the Wolfson Foundation which are supporting the scheme.