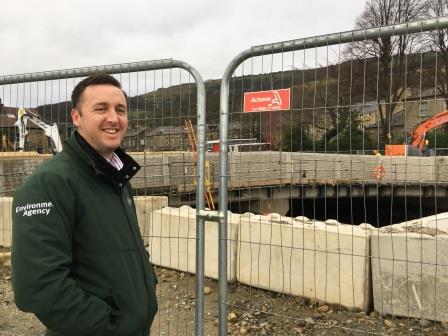 Joint press release from the Environment Agency and Calderdale Council

Great progress is being made constructing the new bridge – a vital part of the Mytholmroyd flood alleviation scheme – and it is set to be open by spring 2020.

The demolition of the existing Caldene Bridge will begin as soon as the new bridge is open, along with the remaining excavation works to widen that section of the river.

A decision was taken to replace the existing Caldene Bridge as part of the Mytholmroyd Flood Alleviation Scheme as it is a major constriction to flood flow and contributed towards the Boxing Day 2015 flood event in the village.

Channel widening at Calder Grove was identified as having a significant benefit for reducing flood risk in the village which required a new wider span bridge.

The new bridge has been built at the widened channel, 25m upstream of the existing bridge which is better aligned with the River Calder. It is a two-span structure, with a central pier and is more than 12m wider than the existing Caldene Bridge. This allows much more water to flow through the village in a more uniform way.

On completion, the capacity beneath the new bridge will be nearly twice the size of the existing bridge, 97.8m compared to 57.9m.

The cost of rebuilding the bridge has been around £7m from Government funding with a £1.6m contribution from the European Structural Investment Fund.

The flood alleviation scheme has been developed by the Environment Agency in partnership with Calderdale Council. Design and construction of the scheme is being carried out by main contractor VBA, a joint venture comprising VolkerStevin, Boskalis Westminster and SNC-Lavalin’s Atkins business.

“The height of the new bridge deck was dictated by the level of the existing roads on both Caldene Avenue and Burnley Road.

“Rebuilding the bridge has been by far the most complex part of the Mytholmroyd Flood Alleviation Scheme as we have had to carry out diversions of many utility services.

“Once the project is complete – the new bridge structure, channel widening, together with the new raised bridge parapets and flood defence walls will provide much better protection for the local community.

However it is still really important that people sign up for our free flood warning service as we can never complete eradicate the risk of flooding, especially with climate change.”

“We’re very pleased to see another major component of the Mytholmroyd flood alleviation scheme nearing completion. The scale and complexity of this project cannot be overemphasised, and we would like to thank those who live in, work in and travel through the area for their continued patience during this important work to help protect the village from future flooding.”

If you have any queries about the scheme please email mytholmroydFAS@environment-agency.gov.uk

You can also register for the Environment Agency’s flood warning service online(external link) or contact Floodline on tel: 0345 988 1188. If you are already registered, do check that your details are correct.