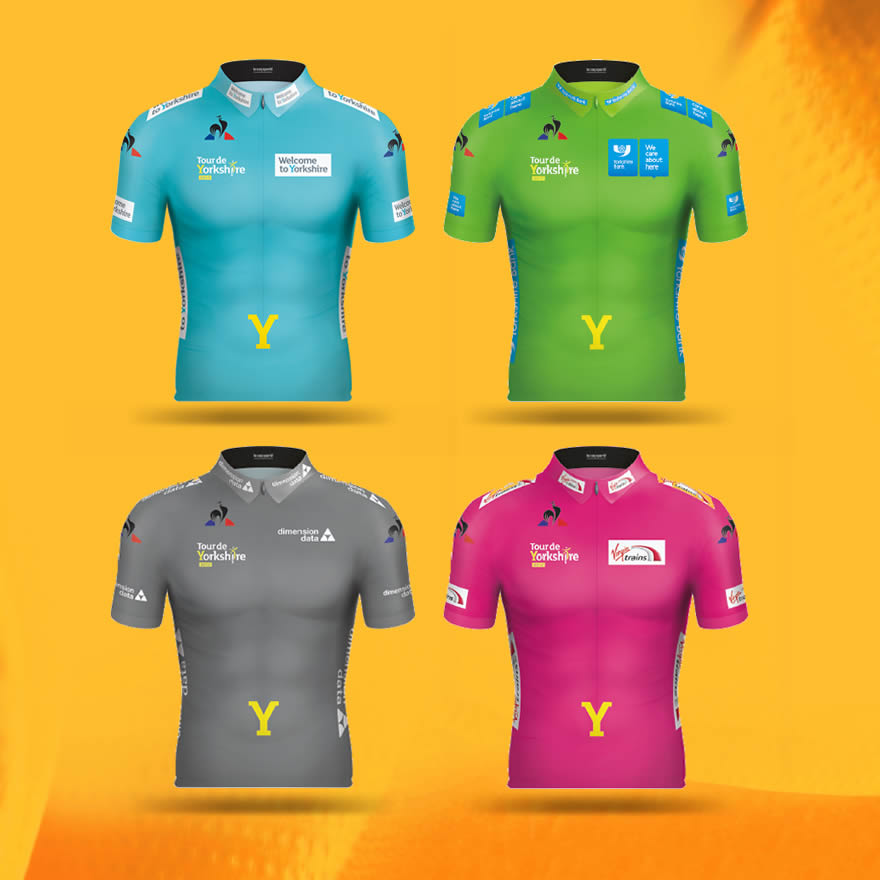 With just over two weeks to go until the start of the 2017 Tour de Yorkshire, race organisers Welcome to Yorkshire and A.S.O have revealed the jerseys and full list of official partners.

The jerseys for the men’s race (which runs between 28-30 April) are being produced by sportswear brand Le Coq Sportif and four new designs have been created to honour the General, King of the Mountains and Sprint Classifications as well as the Most Aggressive Rider on each stage.

Welcome to Yorkshire will sponsor the blue General Classification (overall race leader’s) jersey with Virgin Trains being unveiled as new sponsors of the pink King and Queen of the Mountains Classification jerseys for both the men’s race and Asda Women’s Tour de Yorkshire.

Yorkshire Bank return for a third successive year to sponsor the green Sprint Classification jersey and Yorkshire Bank Bike Libraries are also the official naming partner for the brutal final stage which will take the riders from Bradford to Fox Valley, Sheffield on Sunday 30 April.

Dimension Data also make a welcome return for a third straight season to sponsor the grey Most Aggressive Rider jersey – a prize which is decided in a truly unique way at the Tour de Yorkshire with the public voting to reward the rider who they feel most animates each day’s stage.

As the race goes from strength to strength, Doncaster Sheffield Airportand Flybe are joining forces once again to sponsor the Team Classification in both races. The leading team (selected by taking the lowest cumulative time of the three highest-ranked riders from each team on the General Classification) will be awarded special race numbers on stages two and three which will be worn on the backs of all members of the winning team. As the women’s race is a one-day event, no race numbers will be awarded to the winners of that classification, but their riders will be presented with a special gift in recognition of their achievement.

Asda remain the official naming partner of the Asda Women’s Tour de Yorkshire, which takes place on Saturday 29 April, following a hugely successful sponsorship in 2016 which has made it one of the most lucrative events in the sport. Asda will present the blue jersey awarded to the winner of the women’s race.

Aunt Bessie’s are back to support the women’s sprint jersey and Mugshot return to sponsor a brand-new initiative which will actively support the youngest British rider in the women’s race.

JCT600, in association with Mercedes, continue as the official vehicle provider for both races and will be showcasing their brand at the Harrogate fan zone across the race weekend. All the riders in this year’s race will also sign one of their Mercedes fleet and fans will be able to pose alongside it near the finish line in Fox Valley on Sunday 30 April. Tissot also make a welcome return as official timekeepers, and Mavic as official neutral race support partners.

Welcome to Yorkshire Chief Executive Sir Gary Verity is thrilled that the jerseys for the third edition have been revealed and took time to thank all partners for their continued support.

“The designs of this year’s jerseys look fantastic and we’re hugely grateful to all our partners for the great work they do in supporting the Tour de Yorkshire.

“I’m delighted to welcome all of our tremendous partners who are offering their continued support.

“The race would not take place without their backing and I’d like to thank them and all the other people that help us make it such a success.”