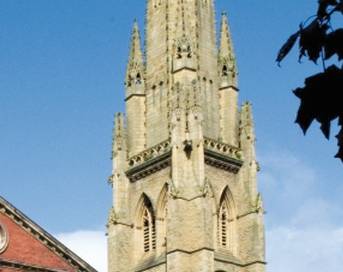 Extra care has been taken with construction work at the Piece Hall and new Central Library and Archive to keep a pair of nesting kestrels safe during the major development project in Halifax.

The birds of prey, which are protected by law, took roost in the spire of the former Square Church on the site of the new library, as work progresses on transforming the Piece Hall into a 21st century heritage attraction and creating a state-of-the-art library and archive.

Although it’s not certain whether the same kestrels come back every year, birds of prey have been seen in the spire in previous years, so Calderdale Council was fully prepared for the possibility of them returning this spring.

Sure enough, two kestrels made themselves at home from May. Tucked away inside the spire, with access through the stone ‘quatrefoils’ (flower-shaped openings), the couple had found their perfect nesting place.

The Council, working with the contractor GRAHAM Construction, was keen to ensure the kestrels were safe and not disturbed by the ongoing works – otherwise they might have abandoned their nest. During the nesting period, around-the-clock CCTV was set up to monitor them, and high-level crane works were scheduled to take place after the chicks fledged.

Four adorable chicks were first spotted peeking out of one of the openings in June. They were fully feathered and looked healthy, happy and ready for their first adventure into the outside world.

The whole family of kestrels have now left the spire.

Kestrels are fully protected under the Wildlife and Countryside Act 1981, which makes it an offence to kill, injure or take a kestrel, or to take, damage or destroy an active nest or its contents (Source: RSPB). They start breeding in spring and nesting pairs typically raise two to three chicks. Chicks usually fledge after four to five weeks.

“This is another example of the great care and attention to detail that goes into all the work on the Piece Hall and new Central Library and Archive. As soon as we were aware that kestrels had taken roost on site, steps were taken to protect them by limiting noise and disturbance around the building. They were fascinating to watch and clearly very comfortable in the spire. It was a real delight to see happy and healthy chicks perched on the building.”

“Everyone on site has received guidance on the wildlife at the Piece Hall as protecting the environment is a key component of GRAHAM Construction’s work, particularly on heritage projects. We will continue to work closely with Calderdale Council and ecologists to minimise any potential disruption throughout the development.”

The kestrels are not the only animals to call the site home – bats, another protected species known to roost in the Piece Hall, are being closely monitored.

The Square Church spire and tower are listed buildings and a prominent landmark in Halifax town centre. They are the remains of the Victorian Square Church, which opened in 1857, was largely destroyed by fire in 1971 and demolished in 1976.

The Council is keen to celebrate local heritage, so is incorporating the church tower, spire and magnificent rose window in the new Central Library and Archive, creating a seamless blend of old and new.

The Piece Hall transformation project is funded by Calderdale Council with a generous £7 million grant from the Heritage Lottery Fund making this heritage regeneration achievable. The Council is also very grateful to the Garfield Weston Foundation and the Wolfson Foundation who are supporting the scheme.

To find out more about the Piece Hall transformation project visit www.thepiecehall.co.uk(external link) or follow @ThePieceHall on Twitter or The Piece Hall Halifax on Facebook. For more information on the new Central Library and Archive head to www.calderdale.gov.uk/leisure/libraries/new-library