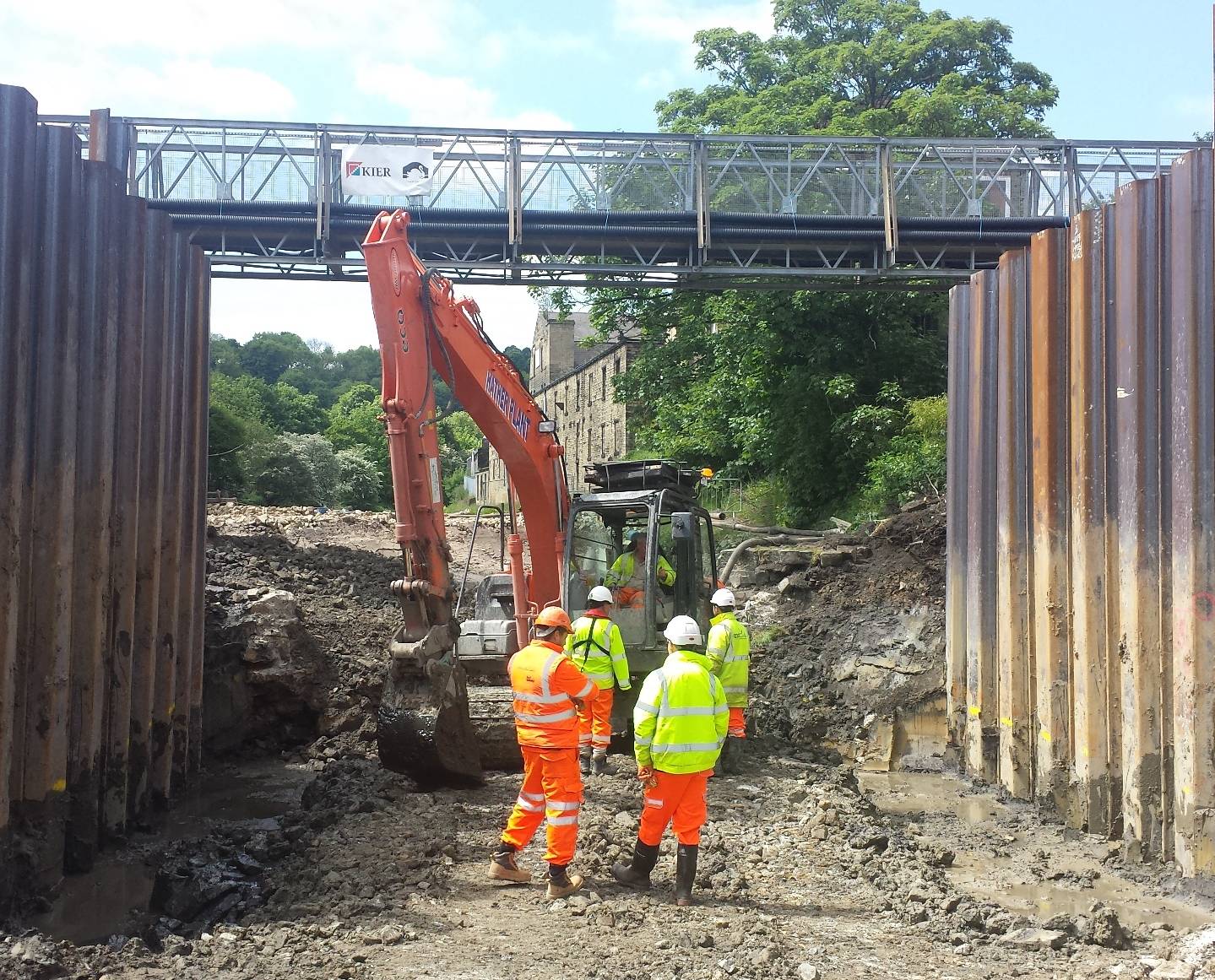 The public are invited to come and see behind-the-scenes of the works to rebuild Elland Bridge, on the Calder & Hebble Navigation, which was destroyed by the Boxing Day floods.

On Saturday 26th November, local visitors will have the opportunity to walk through the construction site, learning from engineers and historians about the modern and traditional skills needed to rebuild the bridge.  The free event will be open from 9:30am to 3:30pm.

For the last 11 months the Canal & River Trust, which cares for 2,000 miles of historic waterways in England and Wales, and Calderdale Council have been working hard to get the bridge back in action after it had to be dismantled and completely rebuilt following the floods.

“We’ve just completed a crucial stage of the bridge works by laying the ducts needed to carry electrical wires and water pipes over the new bridge.  The utility companies have started the complicated task of diverting these services off the temporary utility bridge and back into the new bridge.  Our next job will be to connect the four corners of the new bridge to the existing embankments before we start rebuilding the towpath under the bridge.

“We’re delighted to be able to open the construction site for the day to invite people along and see what we’ve been doing this year.  It’s an incredibly complex and special project and we’ll be able to explain to people the different stages of the build.  Our stone mason will be on hand to demonstrate his carving skills and answer questions about his work on the bridge.  The bridge is expected to open to traffic by the end of the year and we hope people will come along for a look on Saturday 26th.”

Visitors will also be able to see timelapse footage of the bridge being built throughout the year, as well as a series of photos of the rebuilding of the bridge from the Halifax Photographic Society.

Artwork and poems about the flood by children in years 5 and 6 at Elland Church of England Primary School will also be on display at the open day.  Words and phrases from their poems, which tell the story of the flood and describe the children’s experiences of what happened, will be used to create a piece of word art which will be incorporated into the new bridge when it opens.

“Rebuilding Elland Bridge is a major part of the flood recovery work across Calderdale. We know how keen local residents and businesses are to see Elland reconnected, and it’s great to see the new bridge really taking shape and on track to open soon. Head to the open day to learn more about how the specialist and careful work on the bridge will help ensure better protection from any future flooding. Council staff will also be on hand to answer questions.”

In parallel with the works at Elland, together with Calderdale Council, the Trust has also been working to rebuild nearby Crowther Bridge. The bridge has been dismantled with the stone being taken away to be reused on the replacement. The £5.5million work is being financed by the Department for Transport flood recovery funding. Managing the rebuild of Elland Bridge and Crowther Bridge in tandem ensures that the most can be made of cost-efficiencies in design and construction.

It’s anticipated that Elland Bridges will be open to traffic by the end of the year and Crowther Bridge completed by the end of March. A temporary footbridge next to Elland Bridge which was constructed in January will remain in place throughout the works.