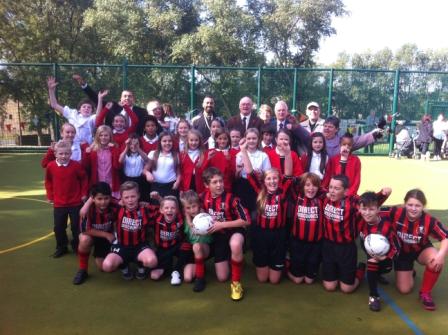 A new Multi Use Games Area (MUGA) has opened in Boothtown, after the area received over £50,000 of funding towards community projects. The MUGA will offer activities including tennis, football, rugby, netball and basketball for the local community, and will be available for people to access all year round.

Calderdale Council and Boothtown Partnership held a voting day at Rawson School, Boothtown in February 2012 to ask residents what they would most like to see in their community. The results showed that residents wanted an area that would encourage young people and others to be active, help to reduce anti-social behaviour and improve the environment. In response, the Council has worked with the Boothtown Partnership, to develop a Multi Use Games Area. The area has been designed to ensure that it can be used by all, regardless of age or disability. An asphalt path leads to the area, making it easily accessible for parents using pushchairs and people who use a wheelchair.

The majority of the funding for the project has come from the Biffa Award, which is a multi-million pound fund, awarding grants to community and environmental projects across the UK. The fund’s money comes from landfill tax credits donated by Biffa Waste Services. The remainder of the money has come from Nesta, sponsors of the Boothtown Challenge, a community project which has financed a number of schemes in the area. A contribution has also been made from the NHS Healthy Town’s Programme.

“This is a brilliant example of what can be achieved when we work together with local communities. The new area is a fantastic asset for Boothtown and will make a real difference to the lives of local people.”