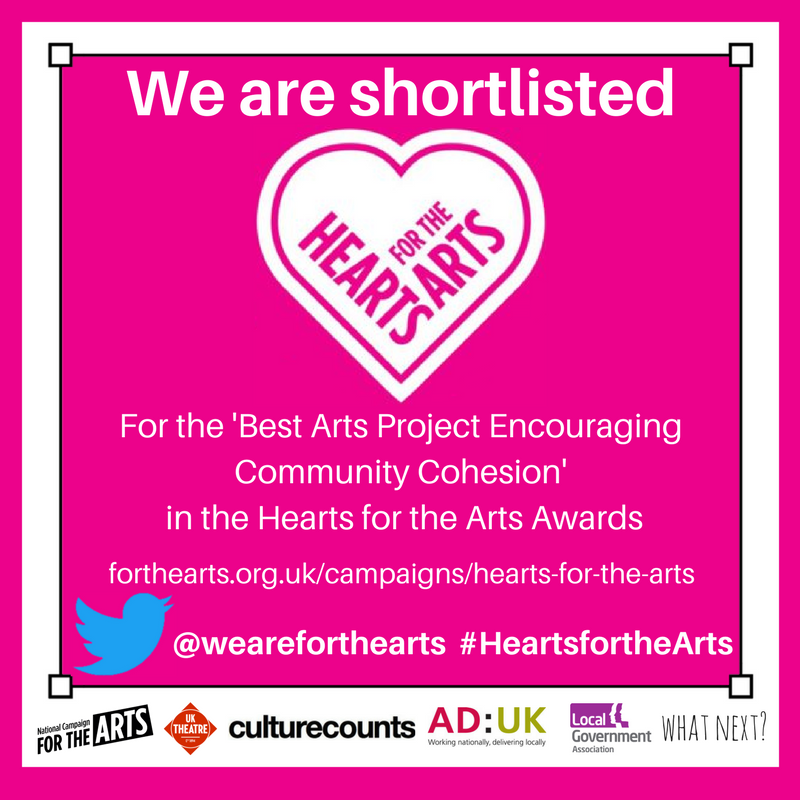 The shortlist has been announced for the National Campaign for the Arts’ (NCA) Hearts For The Arts Awards 2018. The awards celebrate the work of Councils, Councillors and Council Officers who have overcome financial challenges to ensure the arts stay at the centre of community life.

Calderdale Council has been nominated for Local Authority Arts Project Encouraging Community Cohesion for their Landlines and Watermarks project.

The shortlist was judged by representatives from this year’s partners in the awards: UK Theatre, Arts Development UK, Culture Counts, the Local Government Association, and What Next?.

“This community driven festival brought together local people at a challenging time for the community. Allowing hundreds of people to give voice to their experience allowed the community to support each other; that voice was found through arts and culture. Engaging in creativity allowed Calderdale to celebrate its resilience.”

The 2018 Hearts For The Arts Awards are delivered by the NCA and UK Theatre, in partnership with Culture Counts, the Local Government Association (LGA), Arts Development UK (ADUK) and What Next?.

The winners of the Hearts For The Arts Awards 2018 will be announced on Wednesday 14 February. The winners’ judges for the 2018 awards will be: Samuel West (Chair of the NCA), Rachel Wood (Arts Development Officer, Oldham Borough Council AND 2017 winner), Roy Williams, OBE (Playwright and NCA Board Member), Phillip Pullman (Author), David Lan (Playwright and Director), Josie Long (Comedian) and Maria Balshaw (Director of Tate).

For more information on the shortlisted nominees visit http://bit.ly/2moMesH(external link)