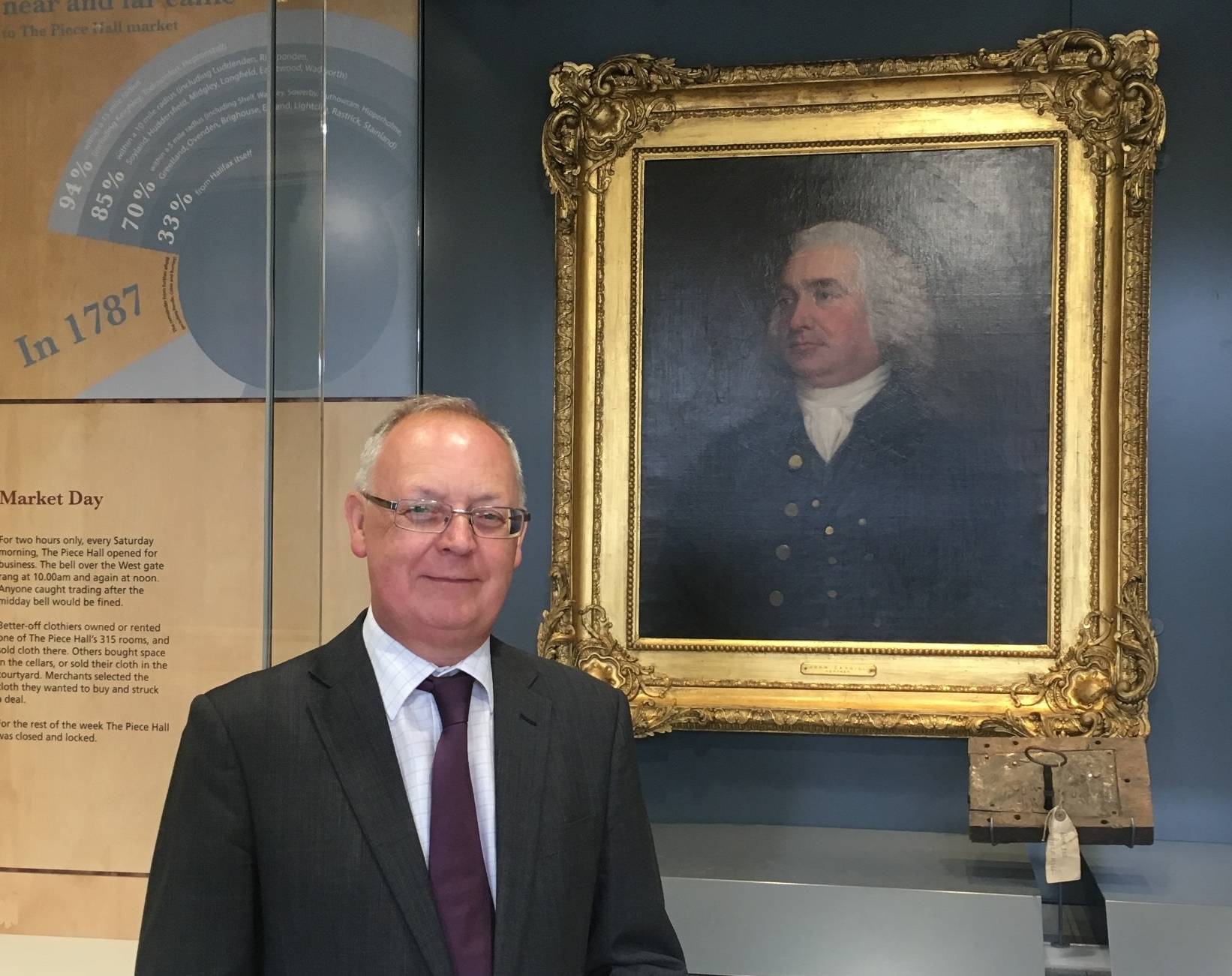 Two paintings with historic links to The Piece Hall in Halifax have undergone careful conservation ahead of the official re-opening of the building on 1 August 2017.

John Hoppner’s portrait of John Caygill and Anderson’s ‘Piece Hall’, from Calderdale Museums Collections, will be displayed in The Piece Hall Story, a new heritage centre which will tell the history of the building and of Halifax.

The Piece Hall Story will be one of the main attractions once the multi-million pound Piece Hall transformation project has been completed.  The project has been funded jointly by Calderdale Council together with a generous £7 million grant from The National Lottery.

“These two very different paintings are integral to The Piece Hall Story, providing a snapshot of its history.  In many ways John Caygill was the father of The Piece Hall, without his land, vision and financial contribution the building might never have existed.

“In Anderson’s view of The Piece Hall, painted in the next century we see an interpretation of the building and courtyard.   It’s still very much a focal point for Halifax and appears to have grown into a town square to be visited and enjoyed, much as it will be once it re-opens in August.”

Hoppner (1758 –1810) was a famous portrait painter, who worked for Queen Charlotte, wife of George III.  He eventually became the Principal Portrait Painter to the Prince of Wales, later George IV.

Hoppner painted some of the most famous and influential figures of Georgian England including Prime Minister William Pitt the Younger, Arthur Wellesley, who later became the 1st Duke of Wellington and Lord Nelson.

As a member of the Caygill family, John Caygill was one of Georgian Halifax’s most prominent and influential citizens.  Hoppner’s portrait is believed to have been painted just a few years before John Caygill’s death in 1787 at the age of 79, just eight years after The Piece Hall opened.

‘Piece Hall’ was painted in the 19th century by John Wilson Anderson (1798 – 1851).  Anderson was born in Halifax but moved to Bingley during his childhood and, after an apprenticeship, set up his own business in Bradford.

Anderson was part of a circle of artistic friends within Bradford, which included Branwell Bronte, brother of Charlotte, Emily and Anne Bronte.

‘Piece Hall’ provides a colourful view of families watching a military display in the courtyard, which at that time was covered in grass.

To prepare the paintings for their prime position within The Piece Hall Story they were sent for conservation. The paintings were carefully and thoroughly cleaned to remove surface dirt which had built up over the years.  The portrait of John Caygill also had heavy deposits of nicotine, from tobacco smoked in years gone by and these were removed.

A small amount of re-touching was required on both paintings and each frame was also checked and repaired, where necessary, so that they look their best for the grand re-opening on Yorkshire Day.

“The paintings are a fantastic addition to The Piece Hall Story and we’re looking forward to sharing the heritage of this magnificent building with visitors young and old, as part of our ongoing programme of activities, workshops, tours, school visits and events.”

The cost of the purchase of John Caygill painting was supported by a grant from the Museums Association’s Beecroft Bequest. The Council is also very grateful to the Garfield Weston Foundation and the Wolfson Foundation which are supporting the transformation programme.