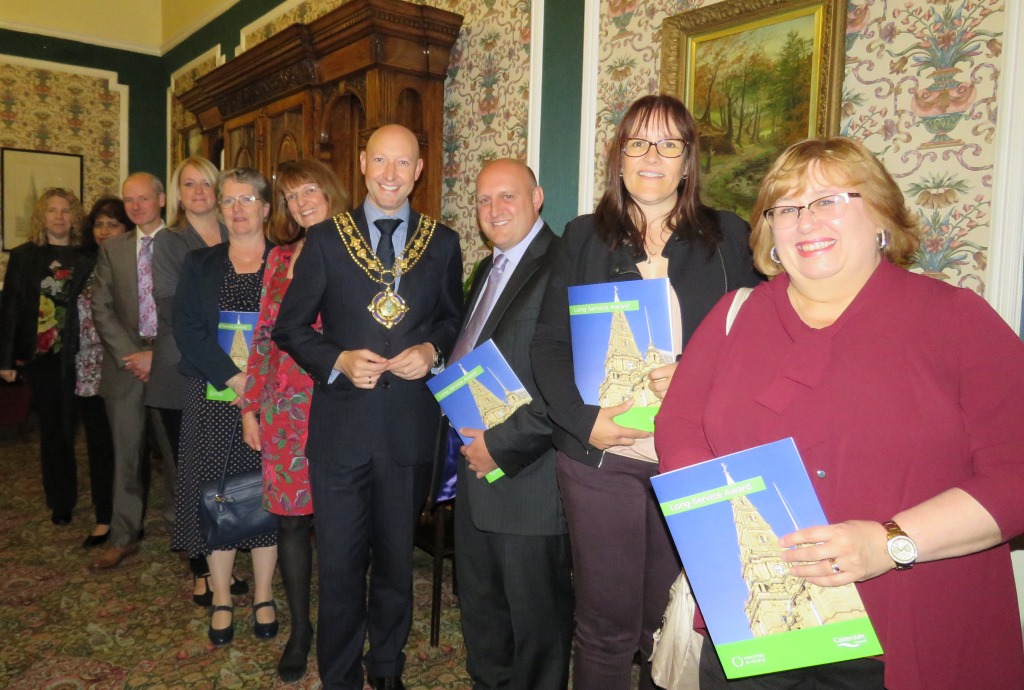 Long serving staff at Calderdale Council have been rewarded for their hard work at the Council’s Long Service Award ceremony at Halifax Town Hall.

Staff who have worked for the Council for 25 years attended the ceremony on Tuesday 18 October, where their individual stories were presented and recognised by the Mayor of Calderdale, Cllr Howard Blagbrough.

Seven staff received their recognition award from the Mayor and while they all had very different stories and career paths, it was clear that the level of service they all have provided over the years has really benefitted the people of Calderdale.

“I was delighted to attend the Long Service Award Ceremony to celebrate the hard work of Council employees and listen to their stories about how the Council and their roles have changed in their time working here.”

Dawn started working for the Council in April 1991 as a Senior Typist, before successfully applying to be a Secretary to Head of Adults in 1994. During Dawn’s service she has seen many changes and supported many Senior Managers, Heads of Service and Directors.  In 2006, Dawn was awarded Calderdale One ‘Employee of the Year’ for being ‘a dedicated and true professional’, always going ‘that extra mile’.

Gail began her Council career in June 1991 as a Temporary Care Assistant and was based at Skircoat Green Aged Persons Home. Since then she has worked in homes across Calderdale and in August 2012, Gail was successful in being appointed as an Assistant Residential Service Worker and then in September 2015 she was appointed as the Acting Residential Service Worker at Lyndhurst.

During her time at Lyndhurst, Gail has undertaken a wide range of qualifications and training, including most recently an NVQ in Social Care.

Janet started at the Council in June 1991 as a Word Processor Operator within Legal. In April 1994, Janet transferred to Property Services and then the Technical Services Department.  In August 2001, Janet moved into the post of Clerical Officer in Building Consultancy Services before transferring to the post of Information Governance Officer in April 2012 –the post she holds today.

Julie commenced working for the Council in September 1991 as a Monitoring Officer in the former Schools and Children’s Services Directorate. In October 2001, Julie successfully applied to be an Area Catering Manager, before holding a number of different positions in the Children and Young People’s directorate. Julie currently works as a Service Manager in the Strategic Commissioning team, which became her permanent position in November 2015.

Jason’s service began in 1991 where he was employed at Bermerside Special School, now known as Ravenscliffe High, as a Non Teaching Assistant.  In 1994 Jason became a Support Assistant and then took the Lead Travel Trainer role in 2005. Jason has been in his current role as an Independent Travel Trainer since 2009. During Jason’s career, he has developed hundreds of students with special educational needs and disabilities to travel independently and learn vital life skills to aid their confidence when moving on from education and many of these students are now in full time employment. Jason has played a major part in their development and was awarded the ‘Live Life Safe’ Suzy Lamplugh Trust, National Personal Safety Award, for the work he does with young people.

Tahira commenced working for the Council in October 1991 as a Trainee Environmental Health Officer and quickly progressed to Environmental Health Officer. In September 2002 she was appointed as a Community Relations Officer, before being appointed as a Principal Community Cohesion Officer and then Principal Cohesion and Equality Officer, which is the position she holds today.  Tahira is committed to equality and community with the aim of making life better for all.

Richard started at the Council in July 1991 as a Technician Engineer in the Borough Engineer’s Department.  In March 1997, following re-organisation, Richard became part of the Projects Group before becoming an Engineer in Highways.

In November 2014, Richard successfully applied for the post of Project Manager within the Economy and Environment Directorate. During Richard’s time at the Council he was involved in many high profile street scape and regeneration work, including designing the new square by St Michael’s Church in Mytholmroyd and working with developers on projects such as Broad Street Plaza.