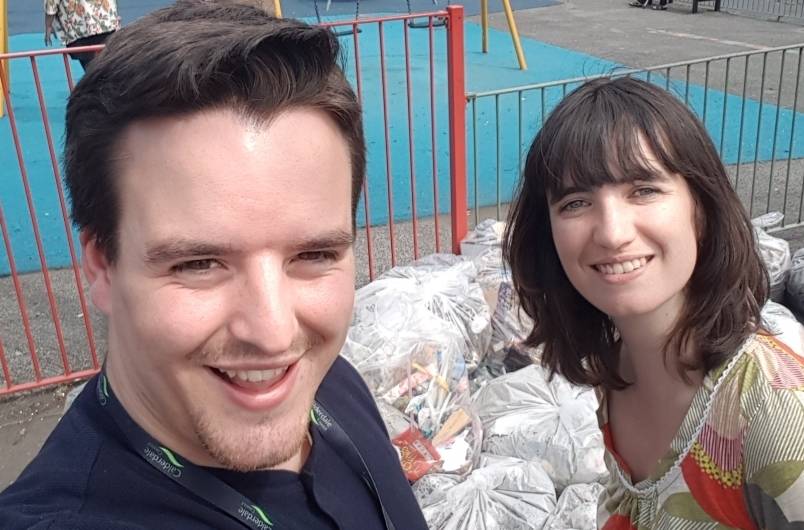 Two new Calderdale Council apprentices are taking the ‘Don’t Muck About’ anti-litter message out into the Calderdale community.

Joel Duncan and Rachael Crane are the Council’s new Apprentice Litter Champions, funded by the Community Foundation for Calderdale and Halifax Rotary Club. They will be visiting local schools and community groups and explaining the impact of littering and how everyone has a part to play in keeping Calderdale litter-free.

“Keeping Calderdale clean is something everyone can contribute towards. Our Litter Champions will be out and about speaking to local people about the role they play in reducing litter and increasing recycling in Calderdale.”

Earlier this year the Council and the Community Foundation for Calderdale launched the Don’t Muck About campaign, all about encouraging residents to feel pride in their surroundings and emphasising the message that the Council will not tolerate littering.

Joel and Rachael took this message to a school assembly at Rastrick High School earlier this month, where they spoke to around 260 pupils.

The pair delivered a presentation called ‘Recycling back to square one’ to emphasise the message of getting back to basics and re-educating people about recycling and that people can recycle more products than ever before.  Since the introduction of the new waste contract in 2016, Calderdale Council collects a much wider variety of items for recycling each week, including plastic pots, tubs and trays, cardboard and smaller electrical items.

Joel Duncan, one of the Apprentice Litter Champions, said:

“As a Litter Champion we have a very important message to tell: We want to go beyond the obvious message of ‘litter is bad, recycling is good’ and let people know more about the impact of littering.

“We also want to inspire people to take pride in their area and help people realise that there are consequences of litter other than just how it looks.”

Steve Duncan from the Community Foundation for Calderdale, said:

“We at the Community Foundation for Calderdale, with our partners Calderdale Council and the Rotary Club of Halifax, want to do something about litter in Calderdale. We have invested in two passionate and enthusiastic young people to champion a litter-free Calderdale. Together we want to encourage people of all ages to take rubbish home rather than throw on the ground and expect others to pick up after them, #dontmuckabout.

“Let us all take pride in the wonderful area we live in.”

You can follow the work of the Litter Champions on twitter @LitterChampions or follow #DontMuckAbout.  To find out more about the work the Council does to reduce littering in Calderdale, visit www.calderdale.gov.uk/dontmuckabout