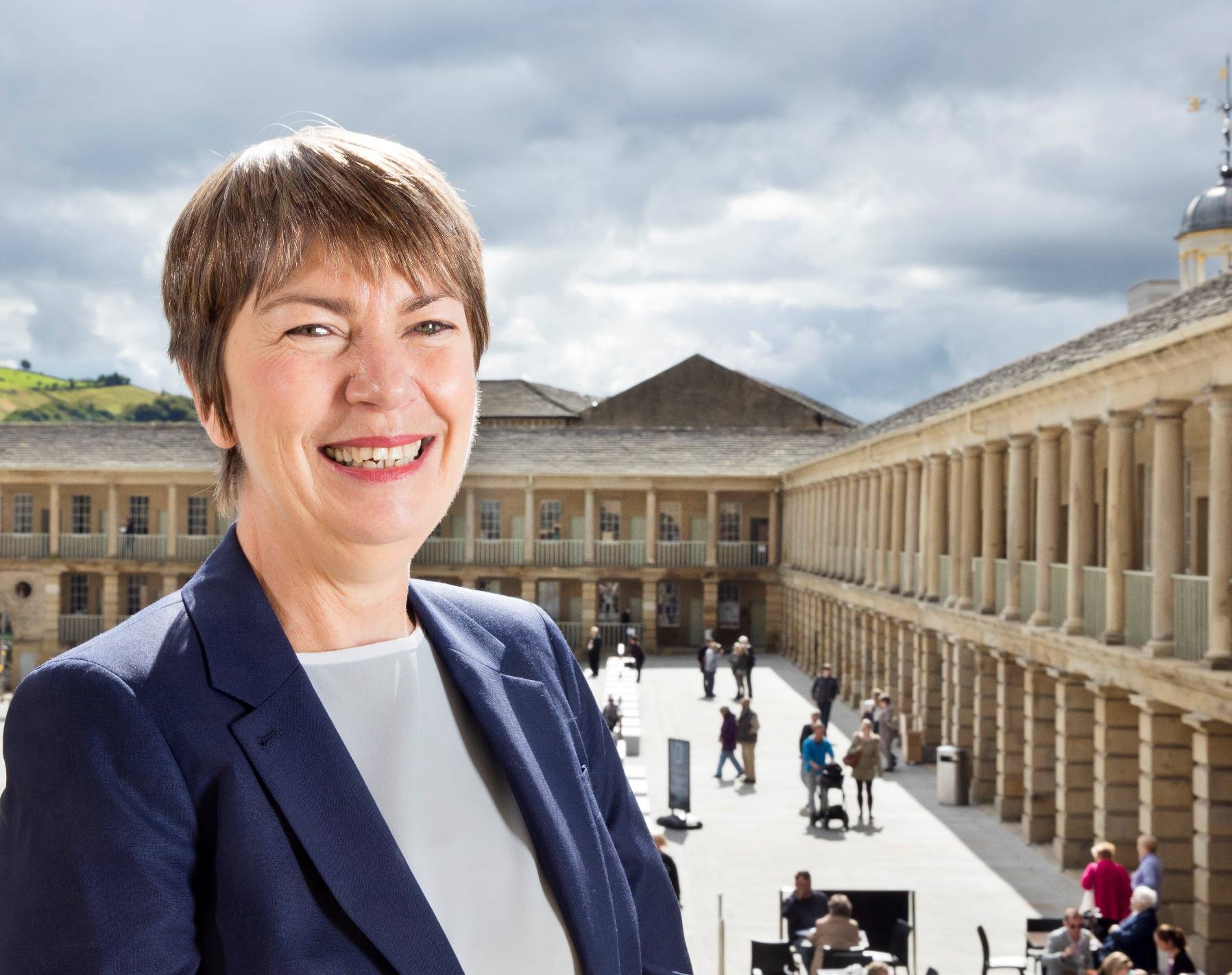 Claire Slattery, Calderdale Council’s Arts and Heritage Manager, who played a major role in the transformation of The Piece Hall, is celebrating being named one of three finalists in the Best Rescue of a Historic Building category of this year’s prestigious Historic England Angel Awards.

Claire was the ideal person to take on the complex restoration of The Piece Hall, especially given that she had seen and been fascinated by the building many years before. “I first visited it after graduating in art history from Manchester University 25 years before,” said Claire. “But I had no idea that one day I would take on the project to restore it.”

The Piece Hall is the last remaining cloth hall in the UK. Work to transform the Grade I listed building into a contemporary leisure, retail, cultural and heritage destination started in 2012, after Claire and her team had secured funding to safeguard its future.

Claire is a highly skilled arts professional with many years’ experience both as a curator, safeguarding objects and celebrating why they are important, and as facilitator of the creation of diverse new work. Working for the Council to support and promote arts and heritage to enrich the lives of residents and visitors, she saw a unique opportunity to restore The Piece Hall.

Her dedication to the Hall sustained the team who wrote successful bids to the Heritage Lottery Fund and several foundations to bring the complex project to completion. The transformation has been made possible by funding from Calderdale Council, a generous £7 million grant from the Heritage Lottery Fund – thanks to National Lottery players – and kind support from the Garfield Weston Foundation and the Wolfson Foundation.

The Piece Hall has resumed its rightful place as the vibrant centre of Halifax. Part of the transformation has included the creation of the Piece Hall Trust, which has taken over as custodian of the building to improve the quality of the trade, retail and heritage offers available to visitors and residents.

Claire has played a key role in developing heritage spaces within the building, where visitors can learn about what has made it so special throughout its history. For example, visitors can step back in time as they enter a space that recreates the atmosphere in which the original traders would have conducted business.

“From the beginning of our project we recognised the need to reinvigorate this Grade I listed building, which is unique in the history of pre-industrial Britain. Unlike many Georgian buildings of this scale, The Piece Hall was built by local, working people and our aim was to return the Hall to its pivotal position at the centre of public life in Halifax, to play an important role in the region once more.

“Watching people delight in the building, answering their questions and listening to their stories about The Piece Hall has been the best part of the project so far.”

“On behalf of the entire Council, I pass on our huge congratulations to Claire, whose hard work and determination have helped to create an incredible heritage destination. Claire is part of an amazing team who have ensured that The Piece Hall is a world-class attraction, which everyone can be proud of and enjoy for years to come.

“The remarkable transformation has conserved our heritage in a vibrant cultural and learning quarter, and will boost the local economy as one part of a whole range of developments across Calderdale.”

“The Piece Hall has been a significant part of Halifax since 1779 when it opened as a hub for trading cloth so it was vitally important that the building’s illustrious past, as well as its potential for the future, was at the heart of the restoration.

“The creation of three interactive learning spaces; The Piece Hall Story, The Trader’s Room and The Map Room shows the importance of Halifax and its traders to the world’s woollen trade.

“In her role as Arts and Heritage Manager for Calderdale Council, Claire and her team have been invaluable in helping to bring to life The Piece Hall’s incredible history. We are so pleased that Claire has been recognised by the Historic England Heritage Angel Awards for her foresight and dedication to a project close to the hearts of so many in Halifax and beyond, ensuring that The Piece Hall will engage, inform and delight visitors for years to come.”

“I’m delighted to champion the people who protect the precious buildings and places around us. Everyone who has been shortlisted for an Historic England Angel Award has made a significant difference to our landscape and built environment. Congratulations to all of them! This year I am especially pleased that we are crowning an overall UK winner for the first time, showcasing the crucial work that is being done across the country by local heritage heroes.”

“I am always impressed by the tireless commitment shown by our Angel Award nominees working together to care for our shared heritage. The variety of this year’s shortlists proves there are so many different ways to engage with our rich legacy of historic buildings and places and as ever, the judging panel will have their work cut out to choose the winners. It is essential that we champion the volunteers and heritage professionals whose work ensures we can continue to enjoy England’s wonderful historic sites for generations to come.”

While the four category winners will be decided by a panel of expert judges, each project is now seeking the public’s support to win a further award. All 12 shortlisted projects – three per category – are in the running for the Historic England Followers’ and Telegraph Readers’ Favourite award chosen solely by the public.

The winners will be announced and presented with their awards at a glittering ceremony at the Palace Theatre, Shaftesbury Avenue, London on 20 November 2017.