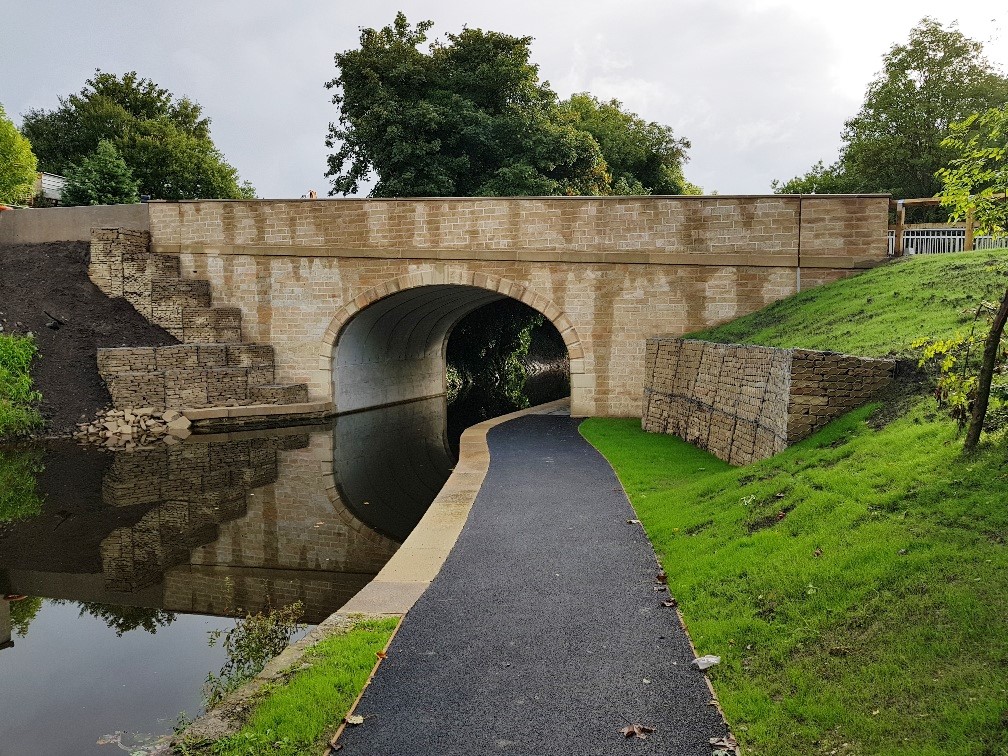 Crowther Bridge near Brighouse is now open, as work finishes on the flood-hit bridge.

Calderdale Council, the Canal & River Trust and the contractor Kier Group have been working to rebuild the bridge after the 19th century original was completely destroyed by the floods in December 2015.

Over the last 18 months, the bridge has been completely rebuilt, along with a new towpath for the canal. The new bridge, which has a design life of 120 years, has been designed to resemble the old bridge as much as possible, but has been built with piled foundations and a concrete core to make the structure more flood resilient.

Local natural stone has been used to face the bridge and the arch ‘voussoir’ stones have been re-used from the nearby Elland Bridge, which was damaged at the same time and reopened earlier this year. The bridges also resemble each other and have been built to a similar design.

Crowther Bridge gives access to the popular Cromwell Bottom Nature Reserve and people will once again be able to use the public right of way over the bridge to visit the reserve as well as using the canal for walking and cycling.

“The opening of Crowther Bridge is another milestone in our flood recovery work and great news for visitors to Cromwell Bottom Nature Reserve and users of the canal and towpath.

“The new bridge has been expertly built to resemble the historic bridge as much as possible, with flood resilience measures incorporated into the build to protect against any damage in the future.”

The Canal & River Trust look after the Calder and Hebble Navigation which passes under Crowther Bridge.  Graham Ramsden, Senior Project Manager for the charity said:

“It’s wonderful to see the full transformation of this site which connects Hebden Bridge to Wakefield and beyond to the Huddersfield Broad Canal. We’re delighted with the results and have already had some lovely feedback from towpath users.”

“Sadly, the original bridge, built in the early 1800s, was damaged by a loose boat during the floods. While we’ve lost of piece of our waterway heritage, the new bridge has deep foundations and concrete core which will prove considerably more resilient, to ensure that boaters, canoeists, cyclists and walkers can continue enjoy this canal for many years to come.”

Crowther Bridge and the recent Elland Bridge rebuild have been financed through £5.5 million from the Department for Transport flood recovery fund.