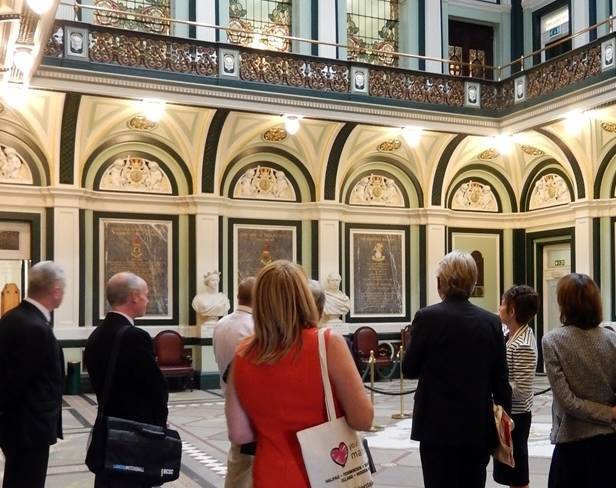 Halifax is one of just three places in the UK to be in the shortlist for the prestigious Great Town Award run by the Academy of Urbanism.

Over 40 towns were nominated by members of the Academy of Urbanism, who drew up a list of 10 leading places for members to vote on. Halifax made it to the final three, beating off competition from the likes of Chichester and Perth. It is now a choice between Halifax, Frome and Margate.

The Academy of Urbanism is an independent organisation that brings together architects, planners and others involved in making places, to learn from good practice across the UK and Europe. Every year an awards ceremony is held to honour the best street, neighbourhood and town amongst other categories.

Calderdale Council submitted the bid for Halifax and hosted the judges’ visit to the town last week.

During a busy day, the judges admired Halifax highlights including the Piece Hall, Town Hall, Borough Market, Dean Clough, Halifax Minster, Eureka! and Orangebox, even finding time for a reception with the Mayor of Calderdale.

The judges were surprised how busy the town centre was compared to other towns that are struggling to keep their high streets alive, and commented on the many examples of good quality, innovative uses of heritage buildings. They were also impressed with the strength of our identity as a unique place.

The winning town will be announced in November.

“It was a delight to be able to showcase all that is great about Halifax to leading professionals from across the UK. Everyone the judges met showed such wonderful passion and commitment to the town. The judges remarked that being shortlisted in the final three towns from over 40 nominations is already high praise for Halifax, and I hope that this nomination puts the town on the map for tourists and businesses across the country.”