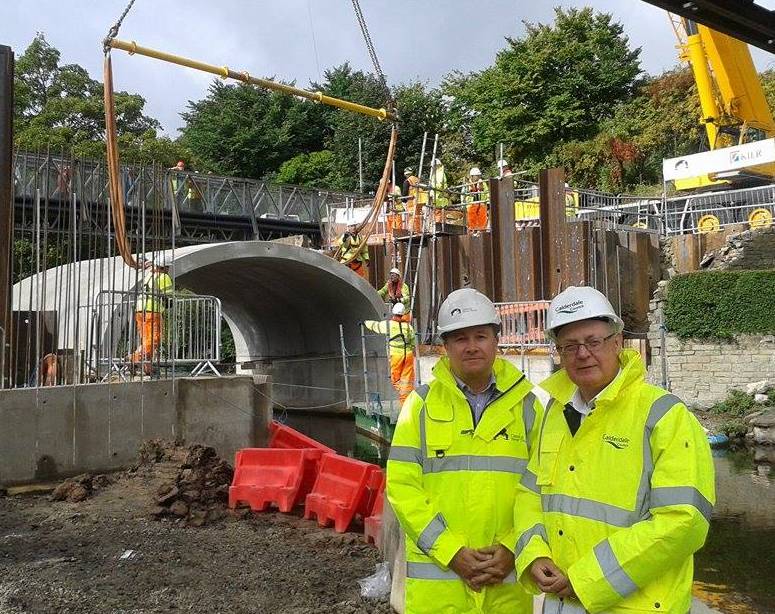 A major milestone in the rebuilding of Elland Bridge in Calderdale is underway, with its new arch being lifted into place to make the new bridge much stronger and more resilient.

This marks the start of the final stages of the work by Calderdale Council and the Canal & River Trust to reopen the former Grade II listed bridge as quickly as possible for local people, after it was destroyed in the Boxing Day 2015 floods.

The old bridge had to be completely dismantled when the sheer force of floodwater washed out its foundations, causing massive structural damage and a huge crack in the road. This was one of the most iconic images of the flooding in Calderdale, the worst hit borough in the UK.

“The installation of the arch is a key moment, where people will see the new Elland Bridge really taking shape. We know that the closure of the bridge has been a difficult time for local people, businesses and commuters, and we are now nearing completion in this final phase of reconnecting the community. Work is progressing well, and this milestone is further reassurance that this important bridge is on track for reopening at the end of the year.”

The new arch is being installed in seven sections, each weighing about 10 tonnes. The pre-cast concrete sections have been made off-site by a local company to ensure the highest possible quality and quickest installation time.

Built to modern standards, the arch will be sturdier and offer greater protection from any future flooding. Once it is in position, this will enable utilities to be relocated over the bridge and the new road surface to be laid. The stone preserved from the original 1811 bridge will cover the new structure to ensure we retain the historical features at the heart of Elland.

A great deal of care and attention to detail is going into every part of the rebuild to be sympathetic to its Grade II listing. The funding to enable the work has been provided by the Department for Transport.

“It will be great to see the concrete arch lifted into position, it’s a really symbolic moment and demonstrates the real progress that is being made on site. The arch will give the new bridge much greater strength and, once in place, our skilled stonemasons can begin the important job of rebuilding the outer walls with stone recovered from the old bridge. Once finished local people will have a bridge that reflects their proud local history and which connects communities once more.”