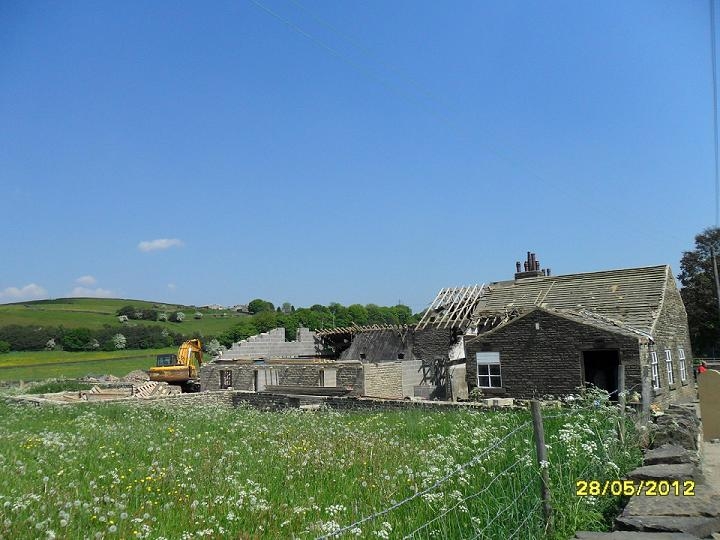 A property development company that unlawfully demolished a listed building has been fined and told by Calderdale Council to protect what’s left of it.

M. Hillas (Properties) Ltd has to pay £3000, plus costs of £1000, for partly knocking down the Grade II* (two star) listed Marsh Hall barn at Lands Head End, Northowram without the Council’s permission. The owner of the barn, Mark Hillas, is a director of the company.

In May 2012 the Council’s planning officers were informed that Marsh Hall barn was in the process of being pulled down. They visited the site the same day and found that half of the barn had been demolished illegally. Mark Hillas was there and confirmed to officers that he was the director of M. Hillas (Properties) Ltd and had given permission for the unauthorised work to the barn, but claimed he had listed building consent allowing conversion of the barn to a dwelling.

However, the Council confirmed that the demolition went far beyond what the listed building consent gave approval for, and was a clear breach of planning control. A large part of the aisled barn was destroyed, including the removal of the majority of the internal timbers which dated from the 17th century or possibly earlier. The barn also contributed to the character and setting of the main listed building, Marsh Hall.

The Council served a stop notice and enforcement notice to prevent any further unauthorised work being carried out.

On 2October 2013 at Halifax Magistrates’ Court, Mr Hillas pleaded guilty to the partial demolition of Marsh Hall barn. The Court found it “highly surprising that an experienced builder like Mark Hillas had carried out the crime of demolition of such extent to a protected heritage asset.”

“The unauthorised demolition or alteration of a listed building is a heritage crime. Heritage crime is an offence that harms the value of England’s heritage assets and their settings to this and future generations. This prosecution sends a clear message that we will take action, when appropriate, against perpetrators.

“In Calderdale we’re proud that we have a wealth of historic buildings. Over 2,100 of these are listed and play a big role in maintaining the heritage of our communities.”