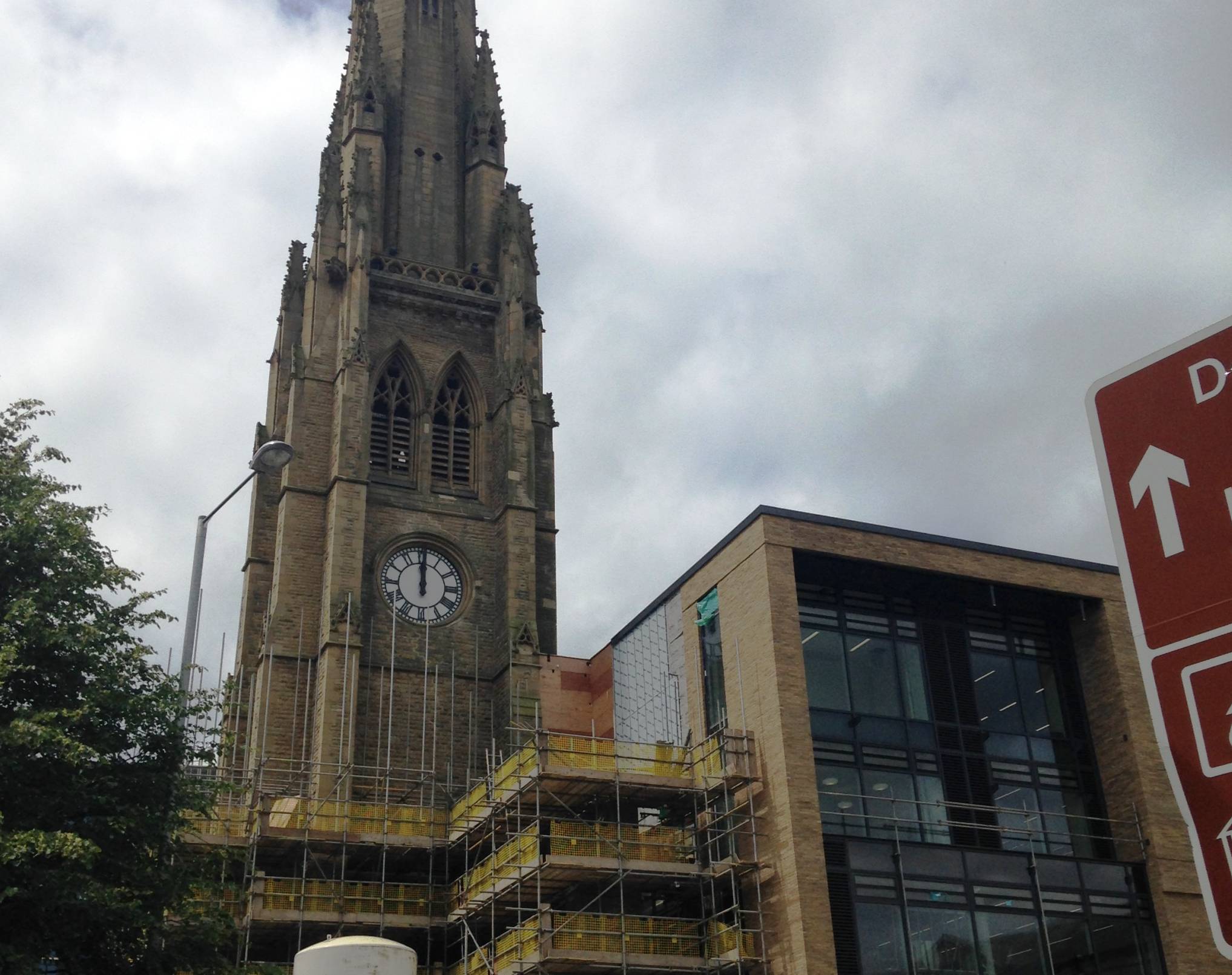 Square Church clock has been restored as part of the new Central Library and Archive in Halifax, West Yorkshire.

When it opened in 1857, Square Church, with its 235 ft (71.5 m) clock tower and spire, was taller than any other building in the town and soon became a prominent local landmark.

The church closed in 1969 and the roof and interior were destroyed by fire in 1971.  The majority of the building was demolished in 1976, however the tower and spire remain largely intact and it is one of the three principal steeples of Halifax.

Grade II * listed, the tower and spire are decorated with carved stone pinnacles, quatrefoil openings and have two clock faces. The surviving south transept gable of the church boasts a carved stone rose window while other remaining window openings have pointed arches and stone tracery.

“I’m delighted that work on the restoration of the Square Church clock is complete.  The spire is one of our major landmarks and will be one of the first glimpses visitors will receive of the town when they arrive in Halifax.

“The clock, together with the tower and spire and the beautiful old rose window, are some of the town’s most treasured architectural features and I’m delighted that they are being restored to their former glory as part of the work to incorporate them into our new Central Library and Archive.”

The spire clock was made by John Moore and Sons of Clerkenwell in London, a company famous for its turret clocks, which was founded in 1790 but closed in 1899.

The restoration of the clock was undertaken by Smith of Derby, one of the world’s oldest clockmakers, responsible for some of the country’s finest and most iconic clocks, including the clock at St Paul’s Cathedral.

The company maintained the Square Church clock until the church closed and still has the historic records, which were consulted throughout the restoration.

The clock has two 9ft cast iron painted skeleton dials with copper hands and a white background which was originally fitted with individual opal glass sections.    The original mechanism, with a pendulum, two weights and a bell was removed early last century and is now in Goole Parish Church, although the records are unclear why this happened.  It was replaced by an electric clock, possibly up to fifty years later.

When the clock was inspected in 2016, as part of the restoration programme, the clock dials were found to be badly corroded, much of the glass was broken and many parts were missing.  The electric movement was still in place but was too rusted to be conserved.

As part of the restoration work, Smith of Derby removed the clock dials and hands and shot blasted them to remove the old layers of paint; repaired any cracks and then repainted them. Opal acrylic, which is more resilient and less prone to cracks than glass, has been used to complete the faces. Now in place the new clock matches the original in appearance.

A new electric movement, fitted with an electronic controller, has been installed behind each clock face, so that it will automatically adjust itself to remain accurate when the clocks change or if there is a power failure.  The clock will be commissioned within the next few weeks.

The only noticeable difference is that the new clock will not strike the hours, to avoid interrupting events at nearby Square Chapel and the Piece Hall.

The new Central Library and Archive will be officially opened by Calderdale Council’s Mayor, Cllr Ferman Ali, on Saturday 9 September 2017.