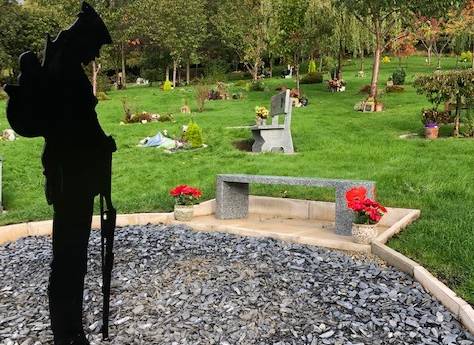 On Sunday 10 November, people across the country will commemorate Remembrance Sunday, and events and services are taking place across Calderdale to mark this important occasion.

The main focus for commemorations in Halifax will be the Remembrance Sunday parade from Halifax Town Hall to the Cenotaph in Duffy’s Park at Halifax Minster. The parade will leave the Town Hall at 10.20am and the Service of Remembrance and wreath laying will be held at the Cenotaph at 10.45am prior to the service inside the Minster at approximately 11.15am.

Elsewhere in the borough, Park Wood Crematorium in Elland has unveiled a special garden of Remembrance in time for this year’s commemorations. The Poppy Garden of Remembrance is a tranquil space to remember the men and women who sacrificed their lives for their country during conflicts.

The garden is watched over by a near life-size silhouette of a First World War ‘Tommy’, known as the Silent Soldier.

Remembering those affected by wars and conflicts is an important part of commemorations. To recognise Calderdale’s role in the Second World War, Bankfield Museum is currently hosting an exhibition to mark the 80th anniversary of the outbreak of war.

Running until Saturday 30 November, the exhibition explores the impacts of the War on the borough, which faced 11 bombing incidents that tragically killed 11 people. Local men and women were conscripted for military and industrial service; industry was placed on a war footing and many workers took on Civil Defence and Home Guard duties.

In the Upper Valley, Todmorden Town Hall is hosting a tour at 2pm on Remembrance Sunday, where visitors can find out more about the role of the building in the two World Wars. Visitors are asked to meet on the opposite side of the road to the pediment, for the free guided tour.

“It’s an honour to represent Calderdale at Remembrance events and I’m proud to be laying a wreath at the cenotaph in Halifax in memory of all those who died serving their country in conflicts all over the world.

“Council representatives will be attending services across the borough to pay tribute to all our serving and ex-service men and women and it’s a privilege to be involved in this special occasion.”