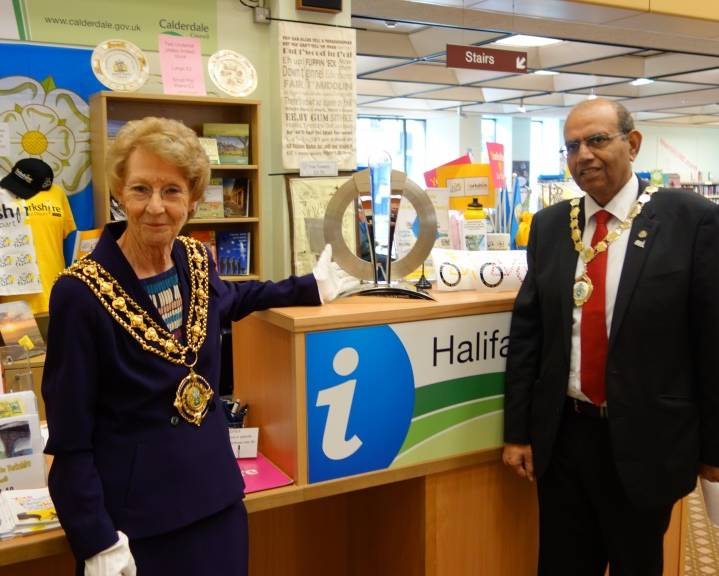 Visitors to the Central Library in Halifax can now get up close to the prestigious Tour de France Grand Départ trophy.

The ornate Grand Départ trophy arrived in Calderdale on Monday 28 April and will be on display until Saturday 3 May, before it continues its journey around the region (please be aware the Library is closed on Wednesdays).

The amazing piece of artwork, commissioned last year for the centenary of the event, is inscribed with the cities and areas who have hosted the opening stage since 2013. Yorkshire will be the second name on the trophy.

The Grand Départ trophy was created by the Tour de France organisers Amaury Sport Organisation (ASO) to celebrate the centenary of the Tour last year.  It was presented for the first time in 2013, to the island of Corsica and at the conclusion of the race; the trophy was officially given by the President of the Executive Council of Corsica, Paul Giacobbi to the Chief Executive of Welcome to Yorkshire, Gary Verity.

Whilst you’re in the library, why not take a look at the Halifax Visitor Centre based there. It has lots of useful information about the Tour de France in Calderdale and a variety of Tour merchandise on sale, including the popular yellow bikes which are popping up around the region. Staff are available to answer questions about the Tour in Calderdale and give out information on the Yorkshire Festival 2014 which has many and varied exciting events taking place leading up to the Tour.

“It is fantastic to have the Grand Départ Trophy visiting Calderdale. This is an excellent opportunity for people in Calderdale to see this iconic trophy and perhaps have your photograph taken with this inspirational piece of artwork.

“Why not come along, see the trophy and then be inspired to watch the biggest sporting event in the world, in Calderdale on Sunday 6 July.”