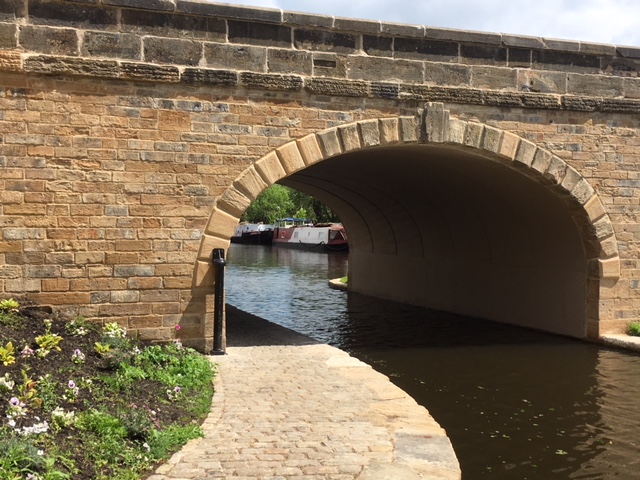 The reconstruction of Elland Bridge, which was catastrophically damaged in the 2015 Boxing Day floods, has been shortlisted by the Institution of Civil Engineers (ICE) in its Yorkshire and Humber regional awards.

Calderdale Council worked with the Canal & River Trust(external link), the charity that looks after the Calder & Hebble Navigation, to rebuild the bridge and reconnect the community as quickly as possible, with an extensive programme of works costing £4 million. The works, funded by the Department for Transport, involved the construction of two temporary bridges, relocation of over 40 utility services and the careful removal and eventual reinstatement of the original stonework on the new structure.

Built around 1811, the bridge is Grade II Listed, so the Trust’s teams painstakingly recorded and removed the masonry to make sure as much as possible could be used in the new bridge. This included the huge stone copings on top of the bridge, the voussoirs – dressed stones that form the arches – and the remains of cast iron rope rollers which ensured boat tow ropes would not get snagged as they were pulled through.

“Reopening Elland Bridge was a major part of our flood recovery works in Calderdale, as it’s so important for residents, businesses, commuters and tourism. The Council and the Canal & River Trust worked really hard to reconnect the community and provide a much stronger and more flood resilient bridge, which will serve local people for many years to come. We’re really pleased that this has received recognition at a regional level.”

“We’re delighted that the hard work of everyone involved in rebuilding Elland Bridge has been recognised with this award nomination.

“The new bridge was designed to look very similar to the original, preserving as many of the important historic features as possible, but incorporating the strength of a concrete arch. Now Elland canal bridge looks very familiar to local people, retaining the scale of the original and able to withstand the pressures of modern use.”

The ICE Yorkshire and Humber awards showcase outstanding work by civil engineers across the region and will take place in Harrogate on 2nd March. The Elland Bridge Reconstruction has been shortlisted for the Smeaton Award (projects costing less than £5 million).

“The standard of entries we see every year is exceptionally high, and this year is no different. As well as engineering excellence, the shortlisted projects also have to demonstrate to the judging panel that they have benefitted the communities where they are situated, and the judges have a difficult task ahead of them.”