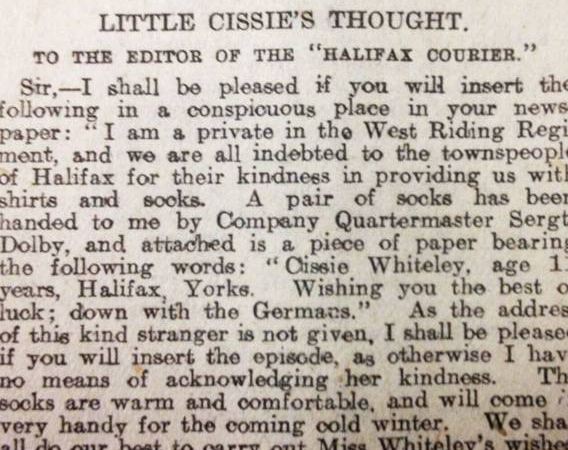 Calderdale libraries have launched the Halifax Weekly Courier for the years 1914 to 1918 on their Weaver to Web site. It is fascinating and timely, particularly with the approach of the centenary of the outbreak of the First World War next year. The news included on the site covers the whole of the Calderdale and includes lots of interesting stories.

Calderdale libraries hold the bound volume newspapers and microfilms for the Halifax Weekly Courier 1914 to 1918, and were keen to bring the resource to a wider audience, making it more usable for people wanting copies, content for displays and local publications. The newspapers are probably the best single resource the Library Service has for the First World War, and they can now be browsed or searched by date or keyword.

“The newspapers from the war years are fascinating. They tell us about recruitment, changes in local industry, rationing, the changing role of women, conscientious objectors and, of course, about the casualties of war. This is a great resource and is available for free.”

The following is an example of the fascinating stories available through this resource.

Private H Newton of the West Riding Regiment who was based at Belton Park (Grantham) sent a letter to the Courier thanking 11 year old ‘Cissie’ for the socks she had knitted. Cissie had enclosed a note saying ‘Wishing you the best of luck; down with the Germans’. The good soldier did not know who ‘Cissie’ was but had sent his letter to the Courier saying that the socks were very warm and comfortable and he would do his best to see England victorious.

H Newton was stationed at Belton Park, Grantham, which means that he was serving in the 8th Battalion who were sent to Gallipoli in July 1915. This means that any soldier serving in the battalion in 1914, assuming he remained in the unit, was entitled to the 1914/15 Star. Of the four H Newtons who served in the West Riding Regiment only one received this medal. He was Harry Newton who was unfortunately killed in action on 30 September 2016 during the Battle of the Somme and is buried in Mill Road Cemetery at Thiepval. Harry was born in Halifax and in 1920 his widow was living in Manningham, Bradford.

As for Cissie, there is nobody of that name born in 1903, which probably means that Cissie is a shortened version of another name such as Priscilla or Celia or possibly a family name perhaps for a girl in a family of boys.

For more information about the archives visit