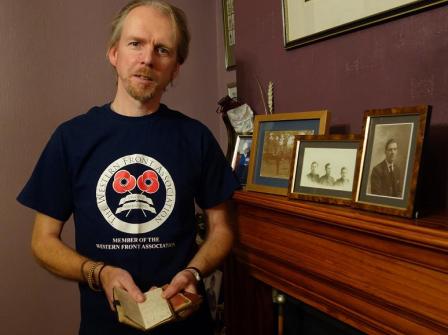 Wartime tales passed down from your grandparents; old family photos on the mantelpiece; your great-uncle’s military medals tucked away in a drawer. They all reveal fascinating stories about the First World War, lots of us have them, and Calderdale Council wants to know about them.

In August 2014, Bankfield Museum in Halifax opens For King and Country – a brand new exhibition and series of events to commemorate Calderdale’s wartime contribution and experiences, marking the First World War centenary 2014 – 2018. Following a successful Heritage Lottery Fund bid, the top floor gallery is being transformed to display a range of objects, images and archives exploring what life was like in the area 100 years ago.

Members of your family may have served in the First World War, or they might have stayed at home to make weapons, chose not to fight, or to look after the family. If you have a story to share for the exhibition, the Council would love to hear from you.

“The First World War is an important and fascinating part of Calderdale’s heritage, and the exhibition is a great way to bring the memories to life. Local people are at the heart of the exhibition and we’re looking for all kinds of stories, from heroism and sacrifice to everyday life during the war.

“It’s a unique chance to proudly showcase a piece of your family history and help people learn more about how the war affected our local communities.

“Alongside the exhibition we’ll be running a series of events and activities, offering people different ways to take part. We’re also working with other organisations and local groups who are looking to commemorate the war, by sharing information and expertise.”

Calderdale has a number of unique stories in relation to the First World War. These include local recipients of the Victoria Cross; the invention of a bomb release mechanism and possibly the first steel helmet; the home of the West Riding Regiment; being a centre for the supply of uniform cloth and blankets to the British army and its allies; the large number of armament factories; and the production of knitting yarn and patterns for the comfort of soldiers.

Bankfield Museum was the home of Colonel Edward Akroyd of the 4th Rifle Volunteers, and houses ‘The Duke of Wellington’s Regiment Museum’, the historic regiment of the West Riding.

If you have a story from the First World War or have carried out research into the period which you would like to share, please email greatwar@calderdale.gov.uk or call 01422 352334 by the end of January 2014.

Using money raised through the National Lottery, the Heritage Lottery Fund (HLF) sustains and transforms a wide range of heritage for present and future generations to take part in, learn from and enjoy. From museums, parks and historic places to archaeology, natural environment and cultural traditions, we invest in every part of our diverse heritage. HLF has supported almost 35,000 projects with more than £5.5bn across the UK including £380m to 2,845 projects in Yorkshire & the Humber alone. Website: www.hlf.org.uk(external link).

Calderdale resident Richard Smith has spent many years researching his grandad, Arthur Smith from Boothtown, who fought in the First World War as a Gunner in the Royal Artillery. He has also travelled to battlefield sites in France and Belgium, where his grandad was posted. Arthur’s brothers, Fred, a territorial in the Duke of Wellingtons Regiment, and Ernest, in the Leinster Regiment, also served. They were all wounded but survived the war and returned to Halifax to work and later marry.

Before they joined up, all three brothers lived in Boothtown with their mother, father, sisters and younger brothers. They were members of Boothtown Road Methodist Chapel and various clubs, and they played local football. Arthur worked at Standeven’s, Ladyship Mills, Ovenden, and when he left to join up he had just finished his apprenticeship as a warp twister.

With photos, memorabilia and shelves full of books, Richard’s home holds many fascinating clues to his grandad’s history. Richard will be sharing Arthur’s stories in Bankfield Museum’s First World War exhibition when it opens next year, just minutes away from where his grandad lived. Richard encourages other local people to do the same. He says:

“The First World War was a huge turning point in our history. The exhibition at Bankfield Museum is a marvellous way to reveal the untold stories and inspire people of all ages to learn more about the war and the families who were part of it.

“I’ve been exploring my grandad’s wartime experience for over 40 years. He passed away when I was 10, but by reading his war diaries, researching his belongings, talking to my dad and visiting the battlefields in France since I was five, I’ve built up lots of stories, which I’m delighted to display at Bankfield Museum. It means everything to me to do that. My grandad is my hero; I’m so proud of him and it’s a real honour to share his records. I want to do this for him.

“I want to do it for other people too – hopefully I can help increase their knowledge and encourage them to research their own ancestors. Just about everyone knows someone who was involved in or affected by the First World War. Every bit of information and every object means something – it’s all part of the history of the war, from the battles to the card games. And it all says something about the character of the people involved and what they became. It’s massively important that their stories are remembered and passed down through the generations so they’re not lost forever.

“I find the research fascinating, it’s helped me build a strong bond with my dad, I’m constantly finding out more about my grandad and it’s something I can pass on to my children. For people who might not know where to start with their research, the Bankfield Museum exhibition will have lots of information at their fingertips and people who can help them.

“I can’t wait for the exhibition to open. Seeing my grandad’s stories on display and helping people relate to the First World War will be such an honour for me and my family. I really do encourage other people to tell their stories to Bankfield Museum – it’s a great way to commemorate their ancestors and teach others about the part that local people played in the war.”