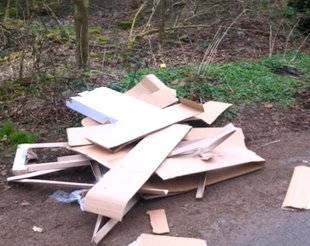 Fly-tippers in Calderdale are counting the cost of their actions after two people were successfully prosecuted for dumping rubbish in the borough.

In cases heard at Bradford Magistrates Court in December, Lee Pickup from Huddersfield pleaded guilty to a fly-tipping offence under the Environmental Protection Act 1990, and in a separate case at court, Valarie Prescott from Halifax was also found guilty of similar fly-tipping offences.

Lee Pickup, 21, admitted dumping waste on Shepherd Thorns Lane in Brighouse, in March last year. Council officers investigating the case found evidence identifying Mr Pickup within the rubbish dumped. He was fined £320, ordered to pay a surcharge of £32 and made to pay £200 as a contribution towards officer and legal costs – a total of £552.

Valarie Prescott from Halifax failed to attend court, and was subsequently arrested on 20 December.

Her case was heard at Bradford Magistrates Court, and she pleaded guilty to charges of fly-tipping two to three bags of household waste on land off Old Lane in Halifax. She also pleaded guilty to a second charge of failing to provide information relating to the first offence.

The Magistrates sentenced both of her offences together and treated the failure to provide information as an aggravating factor to the fly-tipping offence. She was ordered to pay a fine of £480 and an additional surcharge of £48 and £200 towards the Council’s costs, totalling £728.

Like Mr Pickup, Ms Prescott was also caught after Council officers found evidence within the fly-tipping linking her to the waste.

“The Council does all it can to stop fly-tipping, and will not hesitate to prosecute those responsible.

“These cases demonstrate the hard work that Council officers put in to making sure that those responsible for fly-tipping are caught. Sifting through fly-tipped waste for evidence may not be a pleasant job, but it was vital in the prosecution of these two individuals, who are now paying the price for their actions.”