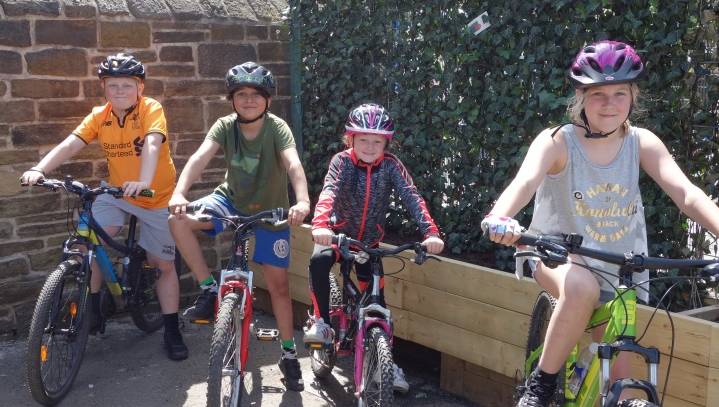 Use of an innovative ‘green screen’ is being tested at Burnley Road Academy in Mytholmroyd, to help make the air cleaner for younger people.

Calderdale Council has installed a plant-based perimeter fence around the school playground as part of its priority to tackle air pollution.

As national Clean Air Day approaches (Thursday 20 June), the Council is raising awareness of the damage that air pollution is having on our health.

Transport is a major source of pollution. Burnley Road Academy was identified as the first school to trial this new screen, due to its location alongside a busy road.

The screen will help absorb harmful pollutants, such as nitrogen dioxide and other particulate matter, and will also improve the look of the school’s outdoor environment.

Although reducing existing pollution is incredibly important, the Council’s wider new Let’s Clear the Air campaign aims to encourage the use of more sustainable travel choices, such as walking and cycling to reduce the amount of pollution we create. www.calderdale.gov.uk/letscleartheair #LetsClearTheAir

Burnley Road Academy is also leading the way in this area, as the school is the first ‘bike friendly’ school in the borough, benefitting from the West Yorkshire Combined Authority’s £60m CityConnect programme aimed at encouraging more people to travel by bike or on foot.

Thanks to funding through CityConnect’s Bike Friendly Schools scheme, Burnley Road Academy has a new shelter with space for up to 30 bikes and scooters. The team has also provided free training for pupils from years one through to four, teaching children to use a balance bike, learn to ride and improve their cycling skills.

The school is close to the Rochdale Canal towpath improvements underway between Sowerby Bridge and Todmorden, thanks to Department for Transport funding secured by the Combined Authority and Calderdale Council, with additional contributions from both organisations. Once complete, the route will be a traffic-free, flat and attractive alternative route to the busy A646.

“Tackling air pollution is a real priority and I’m pleased that we’ve been able to test out the use of green screens to monitor their effectiveness in reducing pollutants.

“Burnley Road is one of the busiest roads in Calderdale and two of our Air Quality Management Areas – areas where air quality objectives are not being achieved – are located on this road. Children are more vulnerable to breathing in polluted air than adults, so it’s important we do all we can to protect them from harmful toxins.”

“It’s vital that we act now to prevent young people growing up with irreversible health issues caused by air pollution.

“Burnley Road Academy is leading the way, not only in the installation of green screens to reduce pollutants, but also by promoting the many benefits of choosing cycling and walking  as an alternative to car use for short, everyday journeys, like the school run.”

“We are delighted that Calderdale chose Burnley Road to test the first green screen. A number of parents and staff had shown concerns about increasing volumes of standing traffic, so we hope the screen makes a positive difference and impacts on air quality for the children at our school.”

“Instilling a love of cycling in children from a young age has long-lasting benefits, encouraging independent travel as a teenager and creating good habits for an active adult life.

“Through our CityConnect programme, the Combined Authority is working in partnership to make cycling and walking a viable option for all residents – regardless of age, ability or circumstance – by not only delivering new and improved infrastructure, but also through initiatives such as our Bike Friendly Schools scheme.

“Encouraging more of us to travel by bike or on foot not only boosts people’s health and saves individuals money, it also brings wider environmental and economic benefits, which is why we want to make cycling and walking a natural choice for short, everyday journeys, including the school run.”