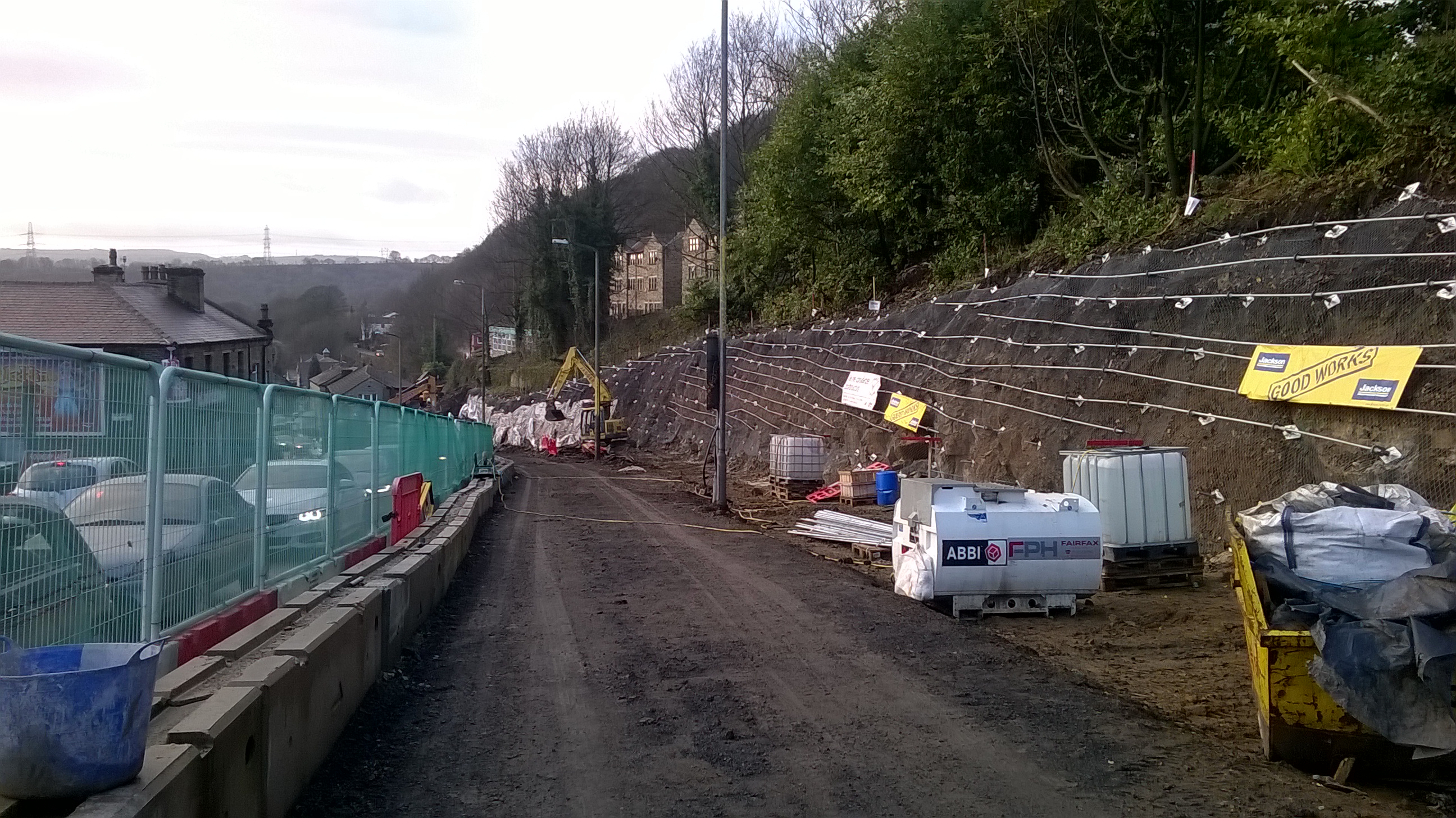 Over 5,000 tonnes of soil and rubble have been removed from Salterhebble Hill during road improvements to tackle congestion along the A629.

Work began in August 2017, and after five months on site, it’s on track to be completed this summer.

Much of the hillside at Salterhebble has now been scraped away to broaden the road and create the additional lanes.  Over 500 steel soil nails, which if placed end to end would stretch 3km, have been screwed into the rock to secure the remaining hillside.  The new cutting will then be planted up to create a vertical garden which will also help to improve the air quality by absorbing carbon dioxide and nitrogen dioxide.

“This scheme is a major undertaking which, as part of the wider improvements to the A629, will bring significant and lasting economic benefits to Calderdale.

“Our projections estimate that traffic using the A629 will increase by 18% over the next decade and without these improvements the road would be gridlocked for much of the day. These works will reduce car journey times from Huddersfield to Halifax by up to 30% and for buses by up to 50%.

“By improving these links between the M62 and Halifax town centre, from 20 minutes to around 14 minutes, it will become a very attractive place to do business.”

“Undertaking large-scale schemes like this, designed to speed up journeys and combat the economic and environmental costs of congestion, is exactly why we used the Leeds City Region Growth Deal, to set up the £1bn West Yorkshire-plus Transport Fund.

“I am pleased that through this work at Salterhebble Hill, we will be improving journeys between Halifax and Huddersfield and also using the opportunity to plant this vertical garden to absorb carbon dioxide and nitrogen dioxide and improve local air quality.”

The Salterhebble scheme is one element of the extensive improvements which are being made along the A629 between Halifax town centre and Huddersfield.

Work on the Free School Lane / Shaw Hill Lane junction has already been completed and is regulating the traffic flow.  Sensors in the road which detect both the number of cars and their distance apart are linked to the traffic lights, helping to reduce congestion at peak times.

The next phase of work is to improve access around the hospital, creating a slip lane from the A629 to reduce queues and to manage traffic flow better, particularly if there are problems on the M62.

The A629 project is the largest individual scheme in the West Yorkshire Combined Authority’s West Yorkshire Plus Transport Fund programme, which is investing £1 billion over 10 years in more than 30 transport infrastructure schemes across West Yorkshire and York.

The unprecedented investment in transport is just one part of the ‘next chapter’ for Calderdale, which will also see major transformations to public spaces and business premises over the next few years. These exciting projects will build on the borough’s unique heritage, fine architecture, vibrant business sector and strong communities.

The West Yorkshire Combined Authority’s Transport Fund has been part-funded through the Leeds City Region Enterprise Partnership (LEP) Growth Deal – a £1 billion package of Government funding to drive growth and job creation across the Leeds City Region. The aim is to create around 20,000 new jobs and add £2.4 billion a year to the economy by the mid-2030s.

For more information on the West Yorkshire Plus Transport Fund programme in Calderdale, visit www.calderdalenextchapter.co.uk(external link)