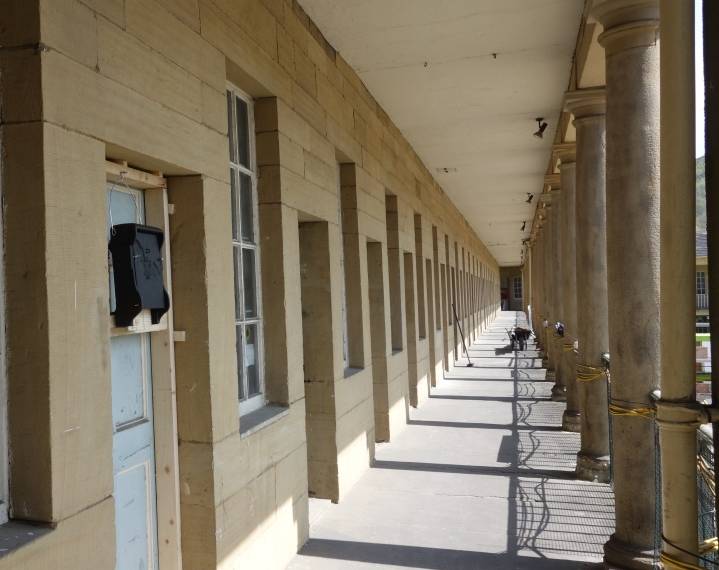 Work on the transformation of the Piece Hall in Halifax is being done particularly carefully after a species of bat was found in the historic building.

The Transformation Project works are funded by Calderdale Council and a major award from the Heritage Lottery Fund. The Grade I listed building is being refurbished and conserved, creating a 21st century heritage visitor attraction. Work is well underway, but before construction began, ecologists from BSG Ecology were commissioned by the Council to carry out a bat survey. During this survey three roosts were found of a bat species called the common pipistrelle, a small bat which is found in a wide range of habitats and often roosts in crevices around the outside of houses and buildings.

All bat species, their breeding sites and resting places are legally protected. For work to continue on site a special licence has been granted from Natural England.

“This is an example of the detailed care that’s being taken over every part of the work on the Piece Hall. I’m fascinated that we have found bats roosting within the Piece Hall and I know the ecologists and staff on site will do everything required to protect the bats while work is taking place.”

A licensed ecologist for BSG, Liz Rose-Jeffreys, is regularly visiting the site to ensure that roofing work is done carefully, to minimise the risk of disturbing any bats.

Liz said of the bats discovery:

“May to August is a key time for spotting bats, as it’s when they’re most active. While roofing work is taking place, I’ve been observing to minimise disturbance to bats during the course of the work in accordance with the licence Calderdale Council has been granted. Bats can roost between tiles, so it’s important that work is done especially carefully.

“So far the roosts have been discovered in the north west and north east corners of the building. There could be more roosts, as they move around the building and use different sites at different times of the year.”

The building work at the Piece Hall is being carried out by GRAHAM Construction, and will include major improvements to visitor facilities, including modern granite seating, level access across the courtyard, customer lifts, enhanced lighting and a central space for heritage events, markets and activities. The company has a strong record of working with buildings of historic importance.

The importance of the bats has been set out for the construction team on site. John Baggaley, project manager for GRAHAM Construction, said:

“All staff are inducted on site and the importance of the bats is clearly explained. A bat box has been installed and more will be put in place as work continues. Any worker that comes across any droppings or sees any bats knows to inform the ecologist, who will come out and carefully capture the bat and place it in the bat box.

“As experts in heritage renovation projects GRAHAM understands the need to support and maintain the local environment. We will continue to work closely with the Council and BSG Ecology throughout the project to ensure the safety and well-being of all native wildlife.”

More information on pipistrelle bats can be found on the Bats Conservation Trust website: www.bats.org.uk(external link)