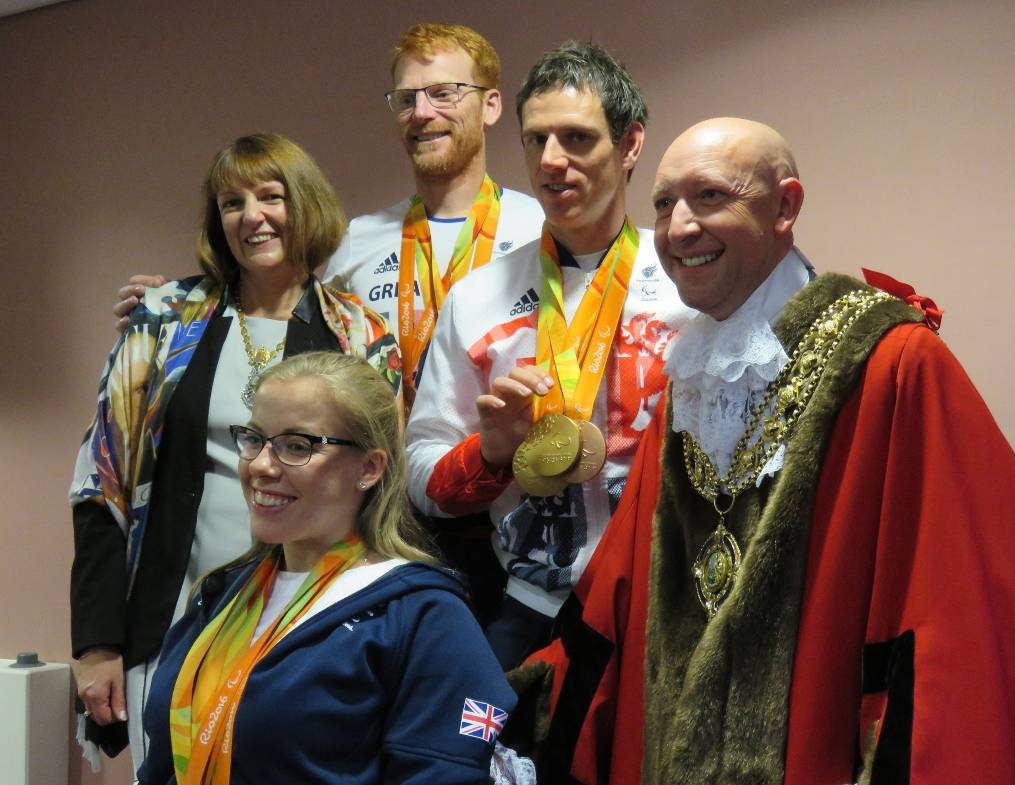 Crowds of local people gathered last night to give a warm welcome to Calderdale’s Rio 2016 heroes.

Calderdale Council played host to a free homecoming event to celebrate the amazing achievements of our local athletes, at the MBi Shay Stadium in Halifax yesterday (Tuesday 11 October).

The Mayor of Calderdale, Cllr Howard Blagbrough, paid tribute to the athletes, presenting them with commemorative plaques and certificates on stage at the stadium. Commenting after the event, he said:

“What an incredible homecoming event! It was really heartening to see people get behind our local Paralympic heroes and celebrate their fantastic achievements. All of the athletes are truly inspirational, and we were delighted to let them know that we are all so proud of them.”

See the Council’s video of the event in action: YouTube(external link).

Local singer and fundraiser Lizzie Jones opened the event with her moving rendition of ‘I Vow to Thee, My Country’.

The athletes then took to the stage to reflect on their Rio successes and ambitions with comedian, after dinner speaker and comedy writer, Pete Emmett, who volunteered his time for the event.

Steve Bate is also a multiple medal winner, with two gold medals in the cycling road time trial B and the cycling track men’s 4000 metres individual pursuit, as well as a bronze in the men’s road race B.

Karen Darke won gold in the women’s cycling road time trial H1- 3 and Harry Brown achieved bronze in the wheelchair basketball team. Unfortunately Karen and Harry were unable to attend the event due to other commitments, but members of their family were there to share the delight.

“Rio was absolutely incredible. It’s great to be back in Calderdale and the reception I’ve had has been phenomenal. I’d like to thank everyone for their fantastic support. Without it I wouldn’t be where I am now.”

“It was amazing to be selected for Rio, and it was an unbelievable experience. It’s really nice to be home in Calderdale. Thanks so much for the amazing amount of support, and all the very best with following your goals and dreams.”

Share your pride and support for our local Paralympians, and your photos from the homecoming event, on Twitter using the hashtag #RioHeroes.

The event follows the launch of the Council’s Active Calderdale project, which aims to achieve the ambition of Calderdale being the most active borough in the North. Follow the conversation on Twitter using the hashtag #ActiveCDale.