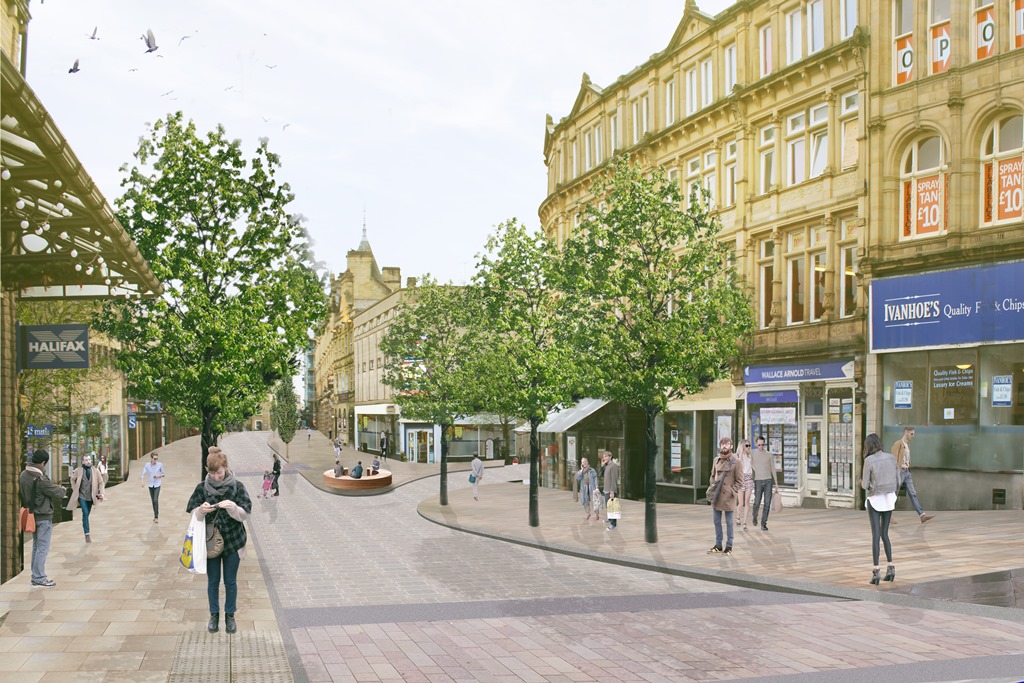 Exciting plans for improvements in Halifax town centre have taken a step forward as the planning application for the project has now been submitted.

The proposals include better cycling facilities and footpaths; improvements to bus routes; easier ways to get into and around the town centre; striking public spaces between the Piece Hall and the train station and at Bull Green.

These will bring benefits including reduced congestion, a safer and more attractive environment and more active ways of travelling.

The planning application, which includes general initial designs for the scheme, is now available to view online on the Council’s planning pages at www.calderdale.gov.uk under the reference: 18/01095/LAA.

“The submission of the planning application is the next step in exciting planned improvements for Halifax town centre. The impressive plans were displayed in Halifax Central Library and Archives earlier this year and received great feedback.

“The new layout and landscaped public spaces will create a more attractive and accessible town centre, with enhanced pedestrian and cycling facilities. The plans will complement the major work taking place to reduce congestion on the A629 between Halifax and Huddersfield and the planned improvements at Halifax rail station.

“This is an exciting time for development in Calderdale. The unprecedented level of investment across the borough will boost our economy as well as making Calderdale a place where people choose to invest, live, work, visit and study.”

“These measures to improve congestion and support inclusive economic growth and new jobs in Halifax are part of the £147 million that the Combined Authority and the LEP have committed to schemes across West Yorkshire and the City Region.

“Calderdale has a crucial role to play in the economic future of West Yorkshire. With measures to reduce congestion and speed up journeys both by car and bus and encourage active travel, this scheme is an important element of Calderdale’s future and will bring daily benefits to its residents.”

“This is another great example of how the West Yorkshire-plus Transport Fund is making a real difference to the people of Leeds City Region. Halifax is already a great place to live and work and these plans will strengthen this further.  The economic regeneration of the area is going from strength to strength, with this investment and the transformation of the incredible Piece Hall, which is key economic driver for growth not only for Halifax and Calderdale but for the whole region.”

The £1 billion West Yorkshire Plus Transport Fund is being invested over 10 years in more than 30 transport infrastructure schemes across West Yorkshire and York, designed to create around  20,000 new jobs and add £2.4 billion a year to the economy by the mid-2030s.

For more information on the West Yorkshire-plus Transport Fund programme in Calderdale, head to www.calderdalenextchapter.co.uk(external link)

The Halifax town centre project is part of the Next Chapter portfolio, a series of economic regeneration and growth projects that are supporting our ambition for Calderdale and Vision 2024.