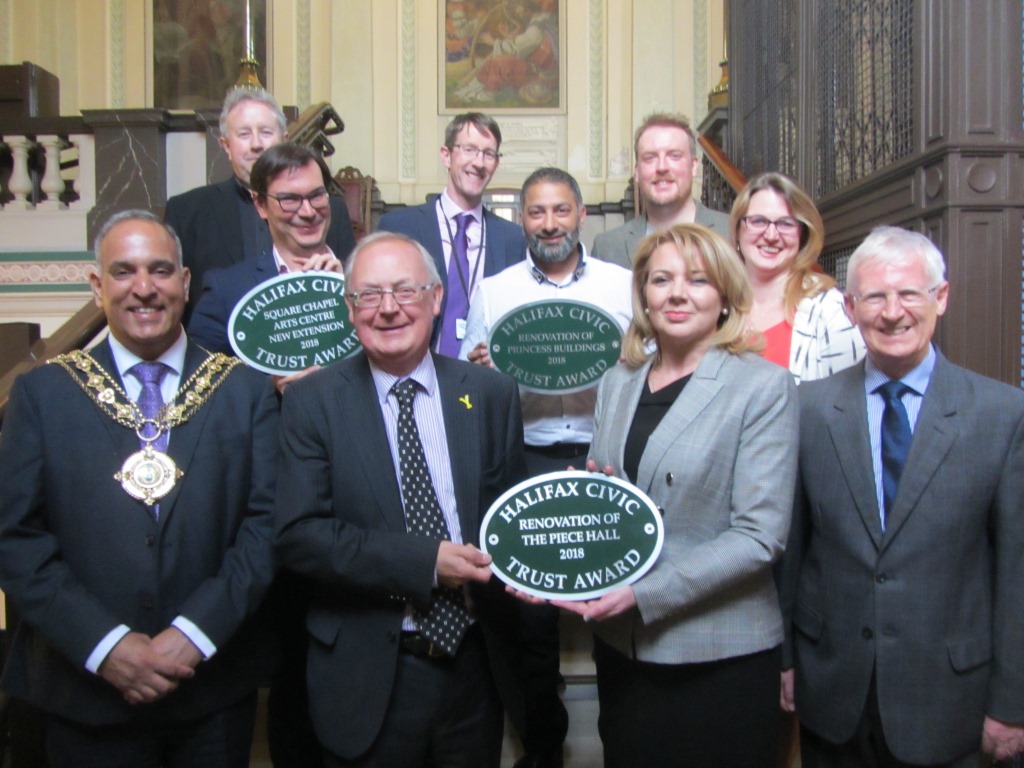 It’s celebration time once again as not one, but three more awards are added to The Piece Hall’s rapidly growing collection.

In the same week that the Grade I listed masterpiece proudly hosted the Tour de Yorkshire, it scooped three prestigious awards for its outstanding transformation.

The Piece Hall came top in this year’s international Lighting Design Awards and the Halifax Civic Trust Awards, and was named one of the top 10 Industry, Trade & Commerce places in Historic England’s campaign, Irreplaceable: A History of England in 100 Places.

“Awards like these really cement The Piece Hall’s place on the map as an amazing international destination. They showcase the incredible work that has gone into all aspects of the building’s transformation, and the fantastic efforts of everyone involved in securing its future.

“It’s wonderful, but not surprising, that The Piece Hall has now either won, been shortlisted for or been entered into a whopping 15 awards, just nine months after reopening.”

“It’s wonderful that the brilliant work of the transformation project and The Piece Hall Trust has been recognised. Our team is focused on creating an international destination and ensuring that The Piece Hall’s potential as a world-class visitor attraction is fully realised.

“The nine months since The Piece Hall re-opened have been more successful than we ever imagined; winning awards such as these, hosting amazing events like the recent Tour de Yorkshire, our upcoming May bank holiday weekend, and the fact that we are fast approaching two million visitors, demonstrates that The Piece Hall is going from strength to strength.”

The lighting scheme was a significant part of the Council’s vision for the future of The Piece Hall. It was designed to be both practical and sensitive – to showcase the building’s classical structure and historical features and to illuminate the central courtyard, steps, seating and water features. The scheme enhances the experience of visiting The Piece Hall at night, making it a beautiful place to be throughout the day and into the evening. The lighting design was carried out by BuroHappold Engineering, working with LDN Architects.

The Piece Hall’s lighting won the Community and Public Realm Project of the Year category after being one of only two UK projects to be shortlisted and standing out from over 300 entries from across the world.

“We are honoured and delighted to have won this award for the Community and Public Realm Project of the Year. A great recognition for what we all work towards in the BuroHappold lighting team: transforming spaces at night to make the public realm more accessible and enjoyable for all. The Piece Hall has been a fantastic project to work on, working closely with LDN Architects and Gillespies to create a beautifully-integrated lighting solution that enhances the architectural heritage and reveals its historical importance at nightfall.

“This award is a credit to all of the teams involved for believing in the design concept, and making it a reality. We are very proud of this award which recognises quality of design for communities and its people.”

As a result of Historic England’s national campaign, Irreplaceable: A History of England in 100 Places, which aims to find the 100 places that bring England’s rich and extraordinary history to life, Tristram Hunt, Director of the V&A Museum, judged the Industry, Trade & Commerce category, and selected The Piece Hall from hundreds of nominations to take pride of place.

The Piece Hall has been included in this list because of its significance as the oldest remaining cloth trading hall in England. Described by Tristram Hunt as the “Piazza San Marco of Yorkshire”, The Piece Hall embodies the vital importance of the cloth trade to the pre-industrial economy of Yorkshire, from the Middle Ages through to the early 19th Century. Right from the beginning, The Piece Hall has been a stunning combination of commerce and culture, an icon of hard business but also a testament to the history, lives and values of its surrounding community.

Halifax Civic Trust chose The Piece Hall as one of the winners of its 2018 awards – alongside Princess Buildings and Square Chapel – after being impressed by the Georgian building’s transformation into a modern venue with improved access and links to the rest of the town, new heritage and learning spaces and a stunning courtyard for events and performances.

The Mayor of Calderdale, Cllr Ferman Ali, presented the award to the Piece Hall team at Halifax Town Hall on Thursday 10 May, during a civic reception in the Mayor’s Parlour.

The Piece Hall has also been shortlisted for this year’s Local Authority Building Control (LABC) Regional Building Excellence Awards – the largest business-to-business awards in the building control sector, which recognise quality in all types of construction project.

The Piece Hall was finalised for its high-quality regeneration scheme delivered by Calderdale Council to secure its future. The historic fabric was sensitively conserved and modern facilities introduced to create an international destination at the centre of the vibrant cultural quarter. Run by the Piece Hall Trust, The Piece Hall is making a major contribution to the regeneration of Halifax.